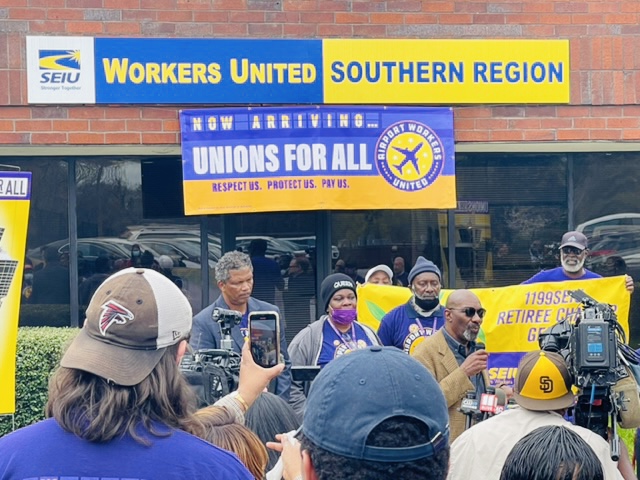 On March 30, contract workers at Hartfield-Jackson Atlanta International Airport held a rally to celebrate winning wage increases after a long fight. The rally took place outside the SEIU Workers United Southern Region office in College Park, Georgia. Workers who for so long have been paid as little as $8.50 an hour will now see their pay rise from $12 to $15, depending on the shift. Permanent workers will also see more vacations.

The fight for higher wages by airport workers goes back more than 13 years. The cleaners and janitors, employed by Atlanta Airport Terminal Company, fought steadfastly for their right to a living wage.

In 2009, workers were being paid a disgraceful $7.25 an hour, which continues to be the Georgia state and federal minimum wage in 2022. More than 10 years later, the wage airport employees had only been increased to $8.50 an hour. The workers who keep bathrooms clean, scrub and wax miles of floorboards, clean up after people in the world’s busiest airport, were subjected to starvation wages.

Meanwhile, airline CEOs were getting paid an average of $5,000 an hour.

Cynthia Hartsfield is a worker representative for the SEIU who has worked at the airport for nearly four decades and earned just $12 an hour. Hartsfield played a leading role in ensuring that she and her colleagues got better salaries. She said at the rally: “It is time our salaries reflect our essential contributions to this airport and these airlines.

This is a significant victory for the Workers United Southern Region, an affiliate of the Service Employees International Union, which represents the airport’s more than 600 workers. Many of the workers are black, brown and immigrant – fighting to change a system of racist discrimination that has imposed unlivable wages on them.

Leading to the victory, Mark Wilkerson, Georgia’s SEIU director, explained that he had spoken to newly elected Atlanta Mayor Andre Dickens and threatened to strike the union if their demands were not met. When Dickens heard this, “he asked to wait [the strike] for two days,” said Mark Wilkerson.

Fearing a major strike that would cripple airport operations, Dickens himself was forced to negotiate better wages with the ACLS for the workers.

The SEIU called it a major victory in a decade-long campaign for higher wages. But for workers, this is just the beginning of what more is possible. Now that this battle is won, workers plan to continue to fight for more through their union.

Atlanta’s victory comes as airport workers across the country take to the streets to demand better wages and working conditions. When workers unite and fight for their interests – showing their collective power – those in charge are forced to give in.