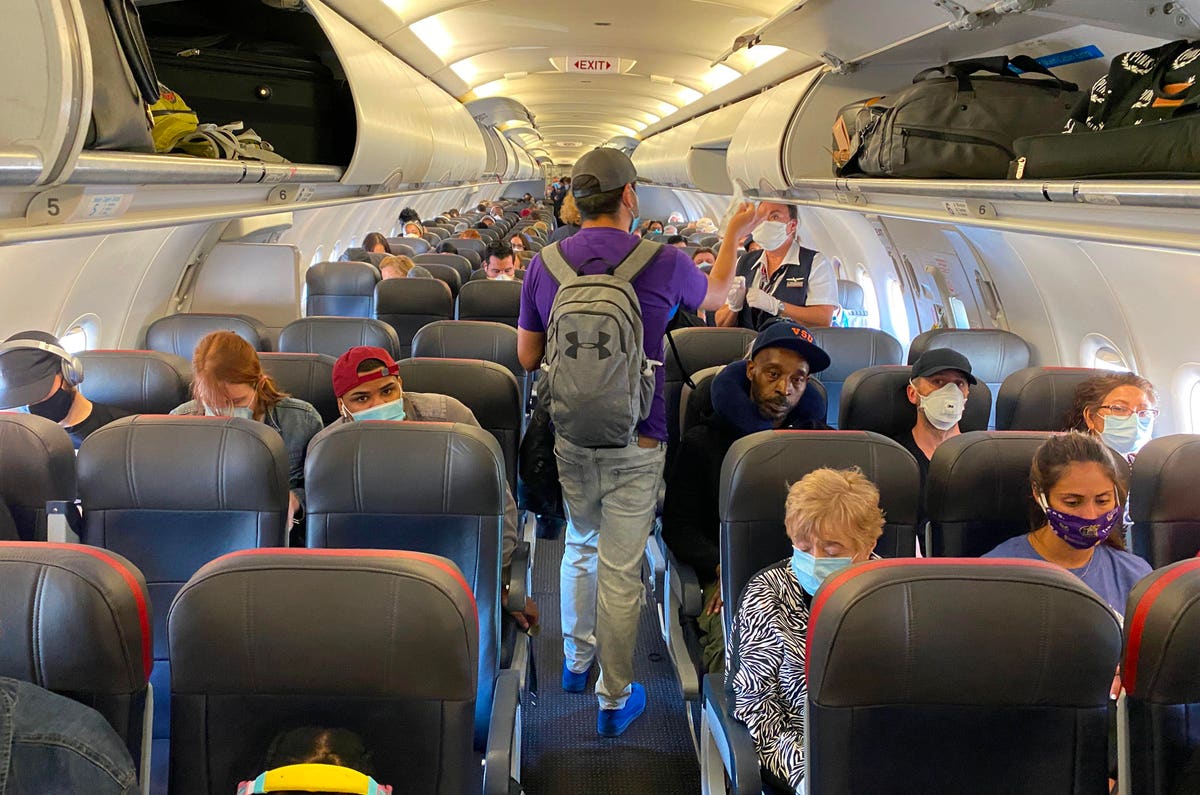 Okay! Okay! We understood. You don’t like – and see no compelling scientific reason why you should be forced – to wear a mask when traveling for business purposes.

Many of us probably agree with you on that. But as your mother probably taught you – or should have taught you – two wrongs never do a good.

So your annoyance, discomfort, and disgust at having to wear a mask just doesn’t justify turning the already grueling experience of boarding an airliner and enduring several hours in a painfully cramped cabin into a devised drama. for television. Besides, your argument continues with your significant other or your travel companion either; nor the fact that the lady across the aisle gave you the “stinky eye”; nor any other circumstance.

Traveling by plane these days is stressful enough. The rest of us don’t need you to add to our anxiety by yelling, cursing, pushing, responding, intimidating, slapping or hitting flight attendants or other passengers. We just want to get to our destination on time – or something close to the time – and do it with as little extra drama as possible.

Yet 2021 is shaping up to be – in fact, it’s already guaranteed – as the worst year ever for bad behavior in the air. So far this year, there have been over 3,400 cases of in-flight disruptions that were severe enough that crews filed reports with the Federal Aviation Administration. Who knows how many other ugly incidents were nipped in the bud before they reached the level of becoming an official in-flight disruption?

Not only do such incidents disturb other air travelers, they are also extremely self-destructive incidents for those involved. Many of these travelers end up on temporary or permanent no-fly lists maintained by the affected carrier or, in many cases, several or even all US carriers, who often share the names and details of these cases.

And over 550 of those air rage cases so far this year were ugly enough for the FAA to open formal criminal investigations. That more such investigations than the FAA has opened in the past three years combined. And we’re only halfway through 2021.

Technically, all of these cases are instances of interference with the ability of flight crews to perform their duties. It is a federal crime that, if serious enough to warrant prosecution that ends in conviction, can result in fines of up to $ 32,750 and up to 20 years in federal prison. There haven’t been many actual cases of air rage in the United States in the years 2016-2019 if you add them all up.

And unless things change, we’re on track to see almost 7,000 such incidents by the end of the year.

Potentially, however, things could change, at least somewhat, on September 13. That’s when the current federal rule requiring commercial airline passengers in the United States to wear masks (except when eating or drinking) will expire.

Earlier this year, the Biden administration extended this requirement up to six months. Now the industry is united in lobbying the administration to let him die on expiration in eight weeks. The various unions representing flight attendants and pilots from United, Delta, American, Southwest, Alaska, JetBlue and several other carriers are already coordinating their lobbying efforts to get the Department of Transportation, FAA, Centers for Disease Control and, most importantly, the White House to let the mask requirement expire in September at the latest, or kill it even sooner.

In doing so, they – and the management of their respective airlines – hope that the massive union voices will be enough to persuade President Joe Biden, whose rhetorical support for unionized workers has been an important part of his entire political career. But there are good reasons to fear the president will expand the mask requirement anyway.

The administration has stubbornly kept the United States closed to almost all Europeans – and most other foreign travelers – this year as numbers for the Covid-19 pandemic have improved. Persistent lobbying and even very public and humiliating pleas from the CEOs of the nation’s largest airlines to drop – even partially – the ban on foreign arrivals fell on deaf ears in 1600 Pennsylvania, Washington, DC Even European government leaders, including notably Germany’s Angela Merkel, have personally urged Biden to reciprocate on the recent opening of European Union countries to American travelers. But so far it has not budged from its current position and therefore, while Americans can fly to most European countries, only a handful of Europeans can fly here (and they must be considered by the US government as coming here on a matter of serious government matter or extraordinary emergency).

There were signs in May and early June that perhaps U.S. leaders were about to drop the ban on foreign travelers traveling here – and perhaps by extension, lower or relaxed travel requirements. masks. But now, with the so-called Delta variant of Covid-19 resulting in a moderate increase in the number of new cases of Covid-19 reported in the United States, and with places like Los Angeles, New York and other places partially reinstituting or full masking rules, the administration is probably once again weighing what it sees as a difficult political decision. What will probably be the political and epidemiological consequences of a decision extending both the rules relating to air travel masks and the ban on foreign travelers coming from it in relation to the political and epidemiological consequences of the lifting of these rules?

Yet should the administration decide to extend the mask rule, as frustrating as it may be for the nearly two million people a day who currently travel on U.S. carriers, and for airlines and their crews, such a move would not justify travelers continuing the unprecedented number of outrageous behavior seen on planes so far this year. Such behaviors – which have included hitting the teeth of flight attendants and banging their heads against bulkheads and luggage compartments over many swearing, screaming, hair tearing and the like – do not result in nothing. Flights – and travelers – are delayed by several hours. Meetings and other important events are missed. Families have lost a day or two of their vacation. Airlines – and in some cases travelers themselves – are left with significant additional costs associated with delays caused by air rage.

And everyone ends up being heartbroken and deeply offended by it all.

Of course, not all arguments and fights on airplanes these days are caused by, or even related to, the current requirement that we wear masks when traveling.

Some of these disputes are brought from their homes by people on planes who continue to bicker on board until it boils over. Other cases are just examples of an increasingly crass, rude, and complacent society in which a certain percentage of the population feels entitled to collapse from time to time – often over minor issues. What if that means disrupting the personal and professional lives of a hundred or more other people, not to mention the lives of their families and associates, the operations of the airline and the dozens and dozens of companies that work for? all these people involved? Well, it’s just hard for the rest of us.

Yet more such problems are caused by alcohol and / or drugs consumed by travelers. In fact, two carriers, Southwest and American, have suspended alcohol service: American by coach until at least September 13 and Southwest indefinitely on all of its single-class aircraft. And, certainly, a small percentage of air rage cases involve real mental health issues (oh, and don’t worry too much … the doors of an airplane cannot be opened in the air, even by a crazed passenger. with seemingly superhuman strength, as the difference in pressure between indoor and outdoor air would prevent even The Hulk from opening a door).

But about two-thirds of air rage cases so far this year, or 2,300 of the more than 3,400 reported cases, are attributed to the mask policy and the refusal of passengers to wear them. And, of course, there are very reasonable arguments against the need for the masks themselves, or at least against the need for a mandatory rule requiring them on airplanes.

Still, the mask rule is in place whether we like it or not. The flight attendant who serves you hasn’t enforced this rule, and almost certainly really, really hates having to be the one trying to enforce it by getting passengers to wear them. The captain of the plane didn’t make the rule either, and he’s sure to be very annoyed with you if you create a disturbance bad enough to force them out of the cockpit to deal with the situation. If this happens, you can bet that you will only be asked to comply once more before you are ordered to leave the aircraft prior to take-off and / or be notified that you will be stopped by the police when the plane door opens.

And in all of these cases, you can bring to the bank only those passengers around you, whose journeys are delayed or disrupted by your behavior, whose ears and sensitivity are assaulted by your bad language, or who are called to the physical action to lock you in and hold you back, will not treat you nicely or nicely.

So, for the sake of everyone around you, for the sake of the hard-working crew who serve you and make you fly, for the sake of your family and (otherwise embarrassed) co-workers, and for the sake of your own good, just put the mask on and shut up about it. Yes, that just might be a boring, silly, and even unnecessary rule. And if you really hate him that much, file a formal complaint, write a congressman about the president. Carry a protest sign over your shoulder. Or picket the airport terminal. You can even make yourself sick with anger, if you want to. But remember, two wrongs never make a good

And let the rest of us travel in peace. Could you please