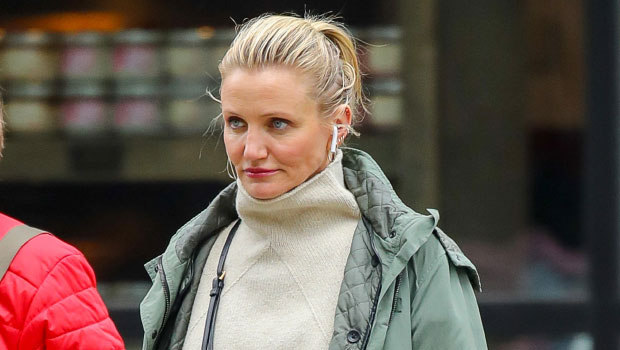 Cameron Diaz49, and Benji Madden43, made headlines on June 18 when they have been spotted walking through JFK airport on a weekend family trip to NYC. Wife and husband welcomed their adorable two-year-old daughter radix, who rested in the arms of his proud father, with them, and they all wore casual outfits as they strolled in front of cameras. Cameron wore a black long-sleeved top and matching pants with orange sneakers while Benji wore his own all-black outfit, which included a long-sleeved top and pants, along with black sneakers and a black baseball cap.

Little Raddix was wearing what appeared to be a white jumpsuit with colored gnomes all over it and pink Crocs. She had her long hair down and looked relaxed as she looked over her father’s shoulder. Cameron added black-rimmed glasses to her outfit as her long blonde hair was down and she appeared makeup-free.

Cameron and Benji, who have been married since 2015, are pretty private about their personal lives together, so their latest outing was a treat for onlookers and fans alike. It’s unclear where they were going or if they were returning from somewhere, but they were apparently seen in possession of passports, so it could have been somewhere outside of the United States. Either way, they seemed happy to be spending time together.

Cameron Diaz then and now: See the actress’ transformation over the years

Before visiting JFK Airport, Cameron made headlines for sharing her secret to staying in shape ahead of her 50th birthday on August 30. The beauty opened up about the process during an interview with her friend. Gwyneth Paltrowthe podcast of, goop and admitted she sometimes does intermittent fasting. “I’m the mother of a two-year-old, so we both have a little of this and a little of that, and do I need to snack as much as she does all day?” she explained on the episode. “Doing a little reset kind of brings you back. It helps you be more present in the moment, stay aware of what you’re saying and what you’re doing.

She also opened up about her skincare routine and revealed that her skin had improved in her 40s because she hardly ever wore makeup. “I wore makeup every day for most of my life, because of work, and it really wore my skin out. I always had a breakout,” she said. “And ever since that I stopped wearing a lot of them, in my 40s – obviously I’m older too, but I had breakouts well into my 40s – I like my skin a lot better.”

‘The Holiday’ turns 14: See Cameron Diaz, Kate Winslet and more from then and now