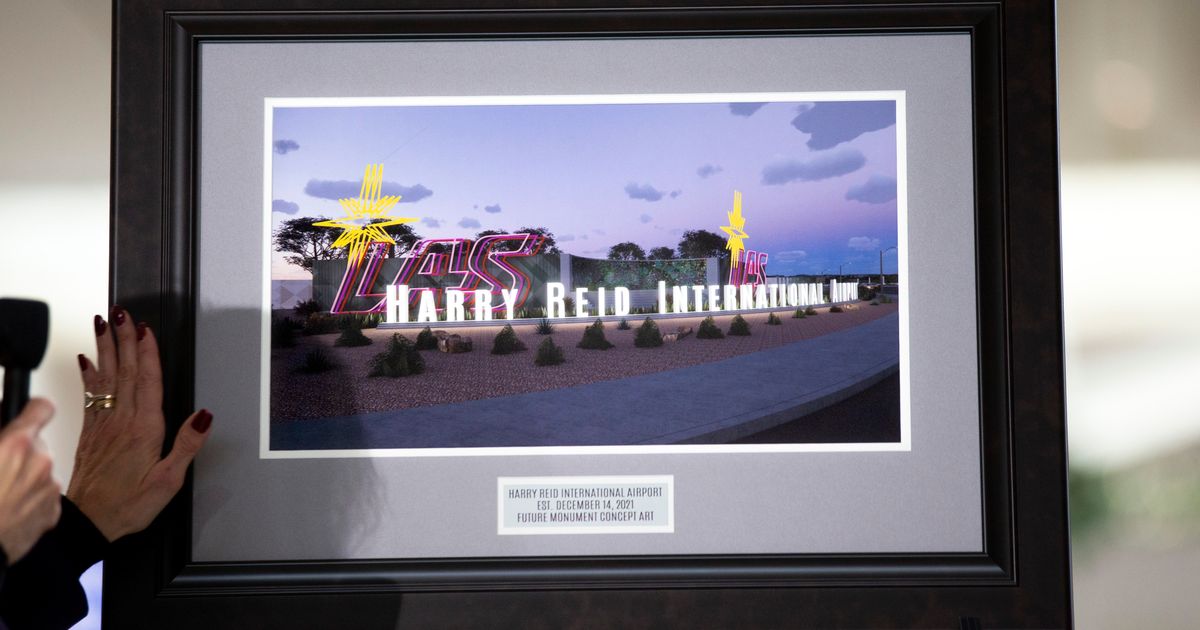 LAS VEGAS (AP) – Former US Senator Harry Reid of Nevada did not attend a name change ceremony on Tuesday, making him the namesake for the busy Las Vegas International Airport, but he was commended for his foresight and his advocacy in favor of state infrastructure.

“He knew this was the gateway to boost tourism,” Carlos Monje, US Under Secretary of Transportation, told family members, elected officials and administrators gathered at the facility known since December. 1948 as McCarran International Airport.

“By investing in infrastructure all around the Las Vegas Strip, visitors can (access) properties more easily and generate millions and billions in revenue for the state,” said Monje.

Reid’s son, former Clark County Commission chairman and Democratic gubernatorial candidate Rory Reid, said his father “wished he could be here” to mark the new name, Harry Reid International Airport , but said he “understands what an incredible honor it is for him.” Rory Reid declined to comment later when contacted by The Associated Press.

The Las Vegas Review-Journal reported that Reid, 82, and his wife, Landra, decided not to attend due to the continuing threat of COVID-19. Reid was diagnosed with pancreatic cancer in 2018. Landra Reid is a cancer survivor.

In a statement, the Searchlight, Nevada native recalled his first plane flight to the airport in 1958 and his more than three decades of travel back from Washington.

“I have worked hard during my years in Congress to help build and develop the airport, and it is a source of great pride for me,” Reid said in the statement. “It is the essential ingredient to the success of Las Vegas; it is the gateway through which millions of people come from all corners of the world to see our city, which is unlike any other place on earth.

Reid lobbied for the development of Terminal 3’s international arrivals annex, which opened in June 2012 and served as the site for Tuesday’s ceremony.

The airport handled 51.5 million passengers before the 2019 coronavirus, including some 3.8 million from cities such as London, Amsterdam, Mexico City, Frankfurt, Germany, and Tel Aviv, Israel. The airport ranks among the 10 busiest in the United States

The airport was founded as Alamo Field in 1942. It was named 73 years ago in honor of then-Nevada Senator Pat McCarran, a Democrat whose heritage is clouded. by accounts of racism, xenophobia and anti-Semitism during his public office. McCarran also owned the airport and he lobbied for commercial aviation, federal public works, and benefits to his home state. He died in 1954.

“Sen. McCarran, in retrospect, was not a perfect human being and did and said a lot of bad things,” Segerblom said Tuesday. “We are not the senator from Nevada where McCarran worked or lived. We are a very multicultural, diverse, multiracial and multiethnic city. “

Officials said the estimated cost of $ 7.2 million to rename the airport was being privately collected, with some $ 3 million still to be used to change sidewalk signs and markers at the doorstep of the airport, and for vehicle decals, uniforms and administrative costs.

Flight attendant reveals what happens to corpses on planes