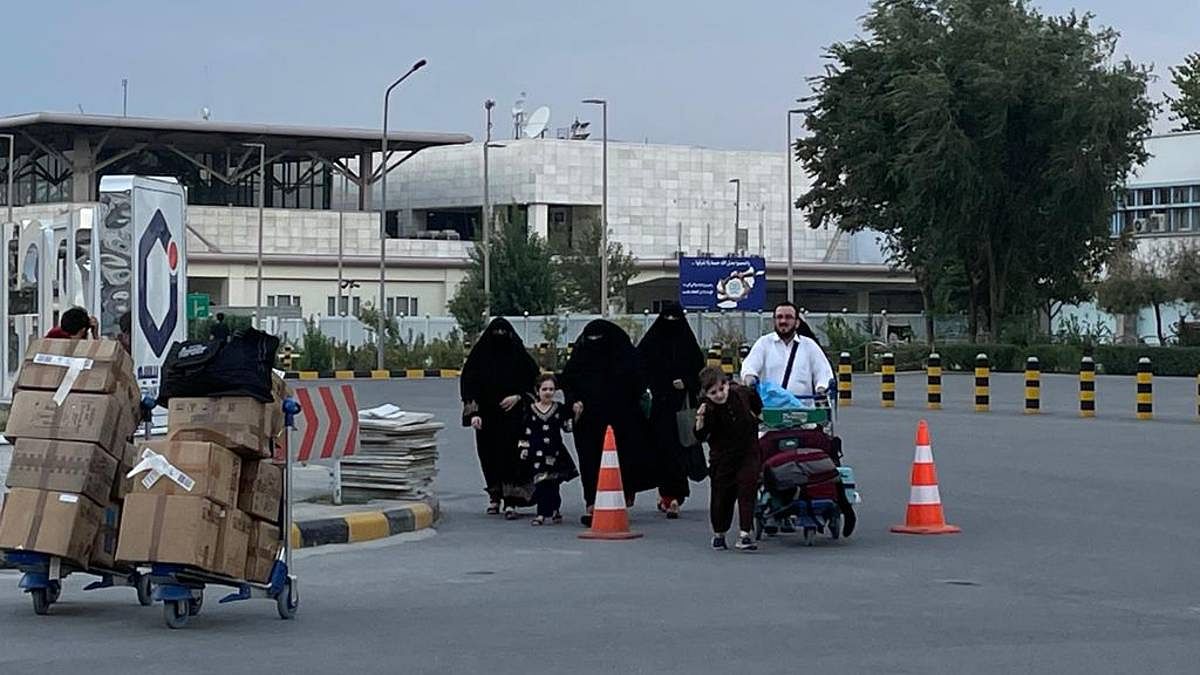 Unnamed airport, IS bombing, Delhi paan, vanilla ice cream – Kabul, one year after the return of the Taliban

Kabul: There was silence at Kabul International Airport on Thursday night as Kam Air’s much-delayed flight from Delhi disgorged its passengers, unloaded its huge cargo and crawled to the hangar. Passengers quickly made their way to the car park on the other side of the airport, the men leading the women – some neatly dressed in black, others more carefree of the shimmering sequin patterns on their green burka sleeves – past the three young Taliban guards at the passenger entrance, in front of the white and black flag of the Islamic Emirate waving in the wind, in front of the “I love Afghanistan” sign in front of the main terminal.

The airport no longer bears the names of two distinguished Afghan leaders – Ahmad Shah Massoud – the Tajik leader, whose brooding portrait reminded everyone of his assassination two days before the Taliban bombed America on September 11, 2001 – and Hamid Karzai – the Pashtun leader, who refused to leave Kabul with his wife and three daughters on August 15 last year, when the Taliban entered the capital without firing a shot.

The airport appears to be a ghost version of itself, hosting a few flights and even fewer people.

The silence extends into the city.

Earlier in the evening, an Islamic State suicide squad burst into a seminary and killed a key Taliban ideologue, Rahimullah Ansari.

The Taliban, to be sure, are nervous – it’s their first anniversary week and they don’t want extremist extremist groups spoiling the party. Just days ago, the Americans brought Afghanistan back to the headlines, when they snatched al-Qaeda’s top leader Ayman al-Zawahiri from a balcony in the heart of Kabul, and killed him with a Hellfire missile launched from a drone. Today, there are enough Taliban with enough weapons at this crossing to prevent pesky journalists from taking pictures, to build up a small arsenal.

Shahr-e-Naw, literally, the New Town, was once a cauldron of noise and activity, the streets choked with cars, the sidewalks buzzing with people of all ages, shapes and sizes. It was like a fashion show – the women of Kabuli strutting around in their tent-like outer garment known as ‘chadaree’ in colors anything but black, basking in the confidence of 20 years of upbringing – while fruit sellers, currency converters and restaurants were doing booming business thanks to generous Western aid.

But this Kabul seems to have withdrawn into itself. An off-season shower that has everyone home running adds to the feeling that something is missing. A young boy is still petting his pet parrot, Toti, in a shoe store as he waits for the rain to clear.

Further down the street, Chara-i-Ansari, or Chowk Ansari, Aimuddin’s shop still sells the best vanilla ice cream in all of South Asia, while his brawny colleague grinds ingredients into an aluminum ‘degree‘ which is encrusted in ice cubes.

Read also: The Taliban will not abandon al-Qaeda, not after the United States kills al-Zawahiri. Kabul is a haven of peace

“Happy India has opened an embassy in Kabul”

The feeling of incompleteness had started at the airport itself – the airport that has no particular name.

As we waited for our luggage on one of the two carousels, it was comforting to find that the air conditioning was working well. We ask one of the porters the cause of the baggage delay, and he turns around and says, “It’s because the cargo from Delhi brought ‘paan.’

Peacock? Yes, paan (betel nut). He adds, “Like, khai-ke paan Banaraswallah”, a line from an old and much-loved amitabh Bachhan.

According to this porter, the cargo from Delhi, along with medicines and clothes and so on, also includes betel nut. Nobody knows if that’s true, but he’s now launched into “Hum toh thehre pardesi”, another Hindi movie song of an unknown vintage.

Baggage shows no signs of apparition.

A slender young girl in nicely coordinated trousers and a long tunic stands nearby, her non-resident Afghan look accentuated by an Australian accent. Afghanistan has changed so much. A sister left, evacuated, when the Taliban arrived in Kabul last year, and is now in the United States. Another sister, recently married, refuses to leave the house. “They broke our hearts. The Taliban broke our hearts,” she said.

Meanwhile, the three young Taliban guards at the passenger entrance inside the airport, aged 21, 22 and 28 – the older man once worked with the much-vilified former president, the security of Ashraf Ghani – do not hesitate to speak about Hindustan.

Hindustan is an old friend. We would like to restart communication with Hindustan. Pakistan and Iran are territorial neighbors and India is a bit far away, but we will not allow our soil to be used by foreign countries against India, one said.

Back in Shahr-e-Naw, the Taliban and their mandate dominate the conversation.

Aimuddin is the most eloquent. “The Americans destroyed the country. The Taliban are good for Afghanistan.

Another young man in a burger restaurant says in perfect English: “You can’t imagine what the Taliban can do to people. A middle-aged Afghan-American, with several properties in the city, insists: “Afghanistan must be run by Afghans. Not by strangers.

Fazal Ahmad, a middle-aged Taliban gentleman from Kandahar, with four daughters – two working as doctors and the other two students – escapes the rain at a store that sells Chinese-made sweets and birthday party supplies. He has traveled to India four times, twice for medical treatment.

“There is no need to be afraid of the Taliban. You can go wherever you want. We are happy that India has opened a “safarat”, an embassy, ​​in Kabul. Right now it’s small, it should be expanded, so Afghans can get visas to travel and Indians can come here,” he says.

The rain has calmed down. The Taliban leader returns home. The shopkeeper deals with a couple of latecomers. Kabul shuts down for the night, pushing its unresolved issues to another day.

Read also: Uncompromising, pragmatic – why India has rekindled ties with Kabul and why the Taliban are welcoming