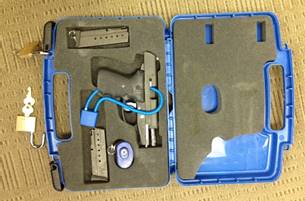 According to an Oct. 4 statement from the TSA, the man, identified only as being from Ohio, was arrested on Oct. 1 while carrying a loaded .380 caliber handgun on a plane. TSA officials detected him in the man’s carry-on baggage and immediately reported him to airport police.

At that time, the airport police responded to the TSA checkpoint to confiscate the weapon. The man told authorities he lived and worked in a motel and carried the gun for his personal protection. He noted that he forgot the gun was loaded before going to the airport for his flight.

Passengers are allowed to bring firearms in checked baggage, but only if they are properly packed and declared at the airline counter. The TSA notes that such firearms should not be loaded, packaged separately from ammunition and placed in a hard case. Additionally, passengers should be aware of the laws regarding firearms, as they vary by state and locality. For more advice, visit the TSA website.

The TSA notes that it reserves the right to impose civil penalties on travelers who transport firearms and firearm parts to its security checkpoints. These penalties are universal whether or not the person has a concealed transport permit, as firearms are not allowed to be carried on an airplane. For a full list of civil penalties, Click here.

It is not known if local authorities have issued any further charges against this passenger.

Always be informed. Click here to get the latest news and information delivered to your inbox