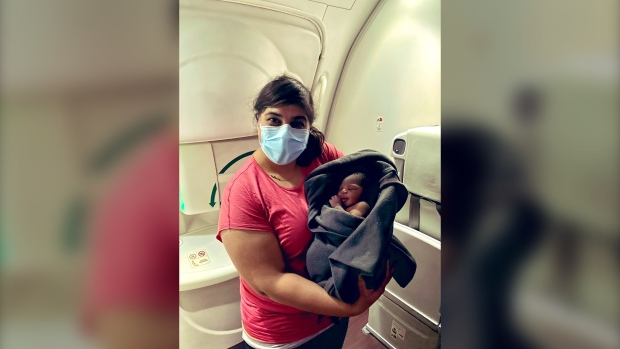 A Toronto doctor’s skills were put to the test last month when she was called upon to help perform a delivery on a transcontinental flight.

Dr Aisha Khatib says she works well under pressure, so when the stewardess of her Qatar Airways flight asked if there was a doctor on board, she wasted no time in offering her skills.

The flight departed from Qatar on December 7 and was bound for Uganda, where Khatib was traveling for work.

“It was about an hour into the flight,” Khatib told CTV News Toronto on Friday. “They basically asked if there was a doctor or medical staff on board.”

Khatib, who works as clinical director of travel medicine at MEDCAN and assistant professor in the Department of Family and Community Medicine at the University of Toronto, was directed to the back of the plane, where a woman appeared to be in labor .

“I saw this woman – she was lying with her head towards the aisle and her feet towards the window and the baby was coming,” she said.

Khatib says her training accelerated and she immediately started helping the woman.

“Someone threw a pair of gloves at me and we had to bend over this woman to pick up this baby as it was coming out,” she said.

Khatib says she had to force herself into the small gap between the window and the woman’s legs to gain access to the delivery.

“I was right up against the window with mom pretty much straddling me as I tried to get enough blankets underneath to reduce the chances of me having a mess,” she said.

“I was just thinking ‘I need pliers. I need scissors. If I don’t have pliers, I’ll need shoelaces and I’ll just try to figure out what to do in this situation if I don’t didn’t have the equipment.

Fortunately, Khatib said the flight crew were equipped with a birthing kit, giving them access to the necessary birthing tools.

Assisted by two other medical professionals flying that day – a nurse and a pediatrician – Khatib says she was able to deliver the baby girl in a healthy and safe manner.

“I was able to cut the cords, cut the umbilical cord. And check the baby,” she said. “The baby was crying and flushed so I gave her a good massage and passed her on to the pediatrician,” she said.

The successful delivery was met with a round of applause from the travelers watching.

“Mom looked good – she looked stable, so I was like, ‘Congratulations. It’s a girl!’ and the whole plane just started clapping,” Khatib said.

“I had totally forgotten that I would be delivering a baby on a plane.”

Both mother and baby were in good enough shape to continue for the rest of the flight. They were transferred to first class and monitored for the remaining five hours, Khatib said.

CTV News Toronto has contacted Qatar Airways for a statement on the incident.

The mother, a Ugandan, decided to thank Khatib by naming the baby after the doctor.

Khatib says she has followed the mother and baby, who she says are doing well in Uganda.

As a keepsake, Khatib left the little girl with a small gift.

“I happened to be wearing a necklace with my name in Arabic at the time so I gave it to him,” she said.

“I wanted her to know where she came from – delivered by a lady named Aisha as we flew over the Nile.”