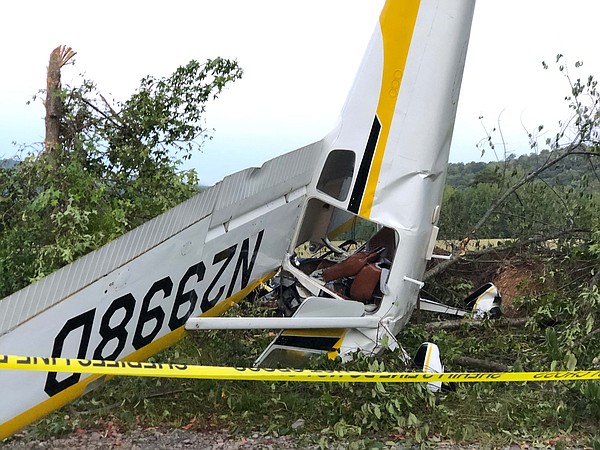 There were a few injuries in the September crashes, but no fatalities.

All three accidents occurred near Byrd’s Adventure Center on the Mulberry River between Cass and Oak. Byrd’s has two grass runways.

“Our 1900 ‘main runway is suitable for many single engine aircraft, while our 1000’ secondary runway is open to ultralight aircraft such as powered parachutes and trikes,” according to the centre’s website, https: / /byrdsadventurecenter.com/fly.

Byrd’s longest trail is in a field south of Arkansas 215 and west of Whispering Pines Lane. This trail goes east and west. The shorter runway has a north-south orientation.

Debbie and Danny Stillwell live on Whispering Pines Lane. They say it’s a dangerous place. On September 12, a small plane struck trees separating the Stillwell house from the runway.

“If the trees hadn’t stopped it, they would be in our house,” said Debbie Stillwell.

Danny Stillwell contacted the sheriff’s office after the crash, saying the planes had been flying over their home for a year now, but were supposed to fly north of it. He posted large letters on his lawn – easily visible from the sky – which read: “No-fly zone. “

Debbie Stillwell said the problem started when Byrd’s started hosting aerial events, like The Ozark Backwoods Challenge, which started on Wednesday and was due to end today.

It is an ArkanSTOL event. STOL stands for “short take-off and landing”.

The fly-in included an event that required the participant to leave the main runway, land on three other designated runways, and return to the landing point.

“Inspired by the harsh terrain of the Arkansas Ozarks, this competition not only tests a pilot’s skills, but demands extreme knowledge of equipment and unparalleled judgment,” according to the Byrd website and arkanstol.com. “The terrain involves real backwood flights while adding the thrilling elements of time trials with unpredictable river valley winds. All of these aspects combine to make this experience more complex than your average STOL competition!”

Rick Covert, Franklin County’s emergency management coordinator, said it was “kind of an anomaly” to have so many accidents in such a short time.

“When I arrived I noticed a high yellow and white fixed-wing aircraft with its tail up and nose sunk into the ground,” Sheriff’s Office investigator Curtis Bishop wrote in his report. .

The aircraft was a 1955 Cessna 170B. The owner and pilot was Jonathan D. Edmonds, 29 years old. His passenger was Mackenzie A. Scott, 28. Both are from Newport.

Edmonds told the Arkansas Democrat-Gazette that he and his fiance flew to Byrd’s on a pleasure trip. They arrived on a Friday and were to take off on a Sunday.

Edmonds, who is also an aircraft mechanic, said he could not go into details of the crash as it is still under investigation.

He thinks his Cessna is totaled. Edmonds said he suffered a fractured femur in the crash and Scott had a broken arm.

Edmonds said Byrd’s airstrip is not too difficult, but pilots need to be careful when taking off and landing there.

“It depends on the plane and the pilot,” he said. “There are a lot of factors that go into it. You have the weather, the temperature, the winds, the type of plane. You have to be careful. It’s a short runway.”

Boulden told investigators the Cessna took off on the main runway in an easterly direction.

“He cleared the end of the runway, cleared the trees and power lines, she said the plane was at low speed and low,” according to Bishop’s report. “She said they looked at the plane and noticed it was not climbing and made a hard left tilt to return to the airstrip for possibly an emergency landing when the engine stalled. and the nose of the plane dipped. The plane struck the ground with enough force between the barbed wire fence and Whispering Pines Lane that the body remained upright and the engine compartment turned up. “

Both occupants were injured and were removed from the plane by Byrd’s workers, according to the report. Both were flown to the University of Arkansas for Medical Sciences by Air Evac.

Neither Pamela Boulden nor Zen Boulden, who is listed as a contact at the Byrd backcountry airstrip on airfield.guide, could not be reached for comment on Friday.

At around 2 p.m. on September 24, Gregory A. Jacobi, 49, of Alex, Oklahoma, crashed while attempting to land an experimental Kitfox IV aircraft on the airstrip next to Whispering Pines Lane .

In a written statement, Jacobi told investigators: “Approach to land on the runway and added throttle to stop you. The engine groped and cut a tree.”

“A plane struck a tree while landing,” according to a preliminary accident report from the Federal Aviation Administration.

Jacobi was not injured, according to the report from the sheriff’s office.

At around 2 p.m. Wednesday, Boulden informed the sheriff’s office of another accident at Byrd’s.

Corwin crashed “on an unmarked private grassy road” at Byrd’s, according to the sheriff’s office.

The plane’s nose was against a fence that connects to Byrd’s Adventure Center, according to the report.

When the assistants arrived, the pilot was on the ground assisted by emergency personnel.

“He was noted to have injuries to both legs, both arms, hands and head,” according to the report. He was airlifted to UAMS in Little Rock.

Covert said the pilot was training before the start of the Ozark Backwoods challenge.

A witness told investigators that Corwin’s plane took off westbound on the east-west runway.

“The pilot was attempting to take off from the ground, turn left and land on a north-facing runway,” according to the sheriff’s office report.

As the plane banked, the engine stalled, causing it to fall, according to the witness.

“As the plane descended, the tip of the left wing hit first, causing a left spin with the left landing gear hitting the ground and breaking,” according to the report. “The aircraft came to rest facing northwest about 18 feet from where the wing first touched down.”

Corwin’s injuries were serious, according to the FAA.

Nationwide, the FAA had 103 accident and incident reports from September 20 to October 1. Incidents include things like an emergency landing on a golf course due to an engine problem.