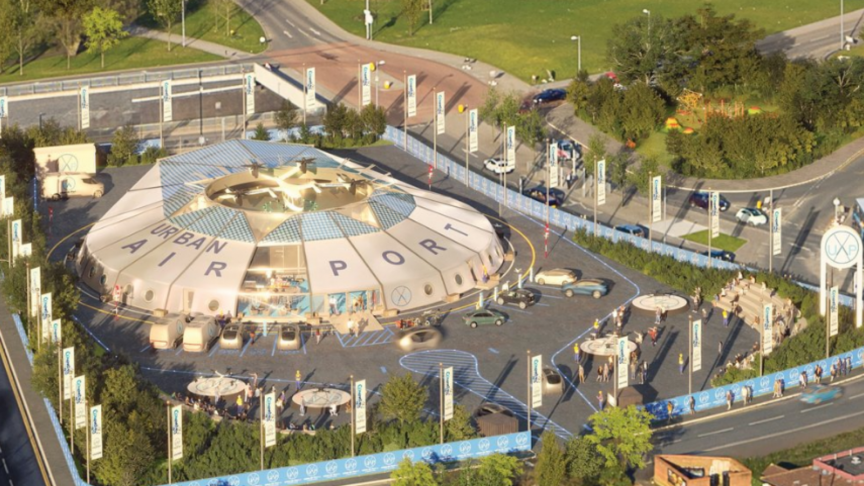 The world’s first urban airport that will allow “flying taxis” to take off and land in busy city areas has opened in the UK, the World Economic Forum (WEF) has reported.

As engineers and designers work on vertical take-off and landing (VTOL) aircraft to make them usable for rapid urban transport, UK startup Urban-Air Port Ltd (UAP) is working to demonstrate that the necessary infrastructure to make these urban hubs of air transport an operational reality is not as complicated as it seems. Last year, we reported that an eVTOL manufacturer was also getting involved in building these airports to solve the infrastructure hurdle.

Now, UAP’s first pop-up airport, dubbed Air One, has been completed in 15 months, including airport planning and construction.

What can you expect from Air One?

A three-hour drive from the bustling streets of London, Air-One has settled in Coventry, a city that gave us the inventor of the jet engine and the Jaguar brand of cars. The project is a partnership between Coventry City Council and Urban Air-Port to demonstrate how urban air mobility can reduce air pollution and congestion on the roads.

Powered by hydrogen fuel cells, Air One is designed to be fully autonomous and integrates with electric vehicles to provide a zero-emission urban public transport system. The airport can handle electric drones and air taxis and has worked with Hyundai’s air mobility arm, Supernal, to use a full-scale model of their SA-1 air taxi as a demonstrator.

At the airport, one can see all elements of urban mobility such as passenger taxi processing, command and control center, logistics, charging infrastructure as well as disaster management and security services . There are also live flight demonstrations with drones that will also see local police take part in operational scenarios, the Air One website says.

What’s in the future?

Air One has an address in Coventry but only until May 15. After that, the company plans to wrap up the airport and then relocate it to other locations in the UK to bring the experience closer to people.

As the market for eVTOL takes shape, Urban Airport plans to install its city airports in over 200 locations worldwide with airport planning in the bustling cities of London, Los Angeles as well as countries like Germany, France, South Korea and Australia. .

Now we can’t wait for eVTOL technology to catch up.