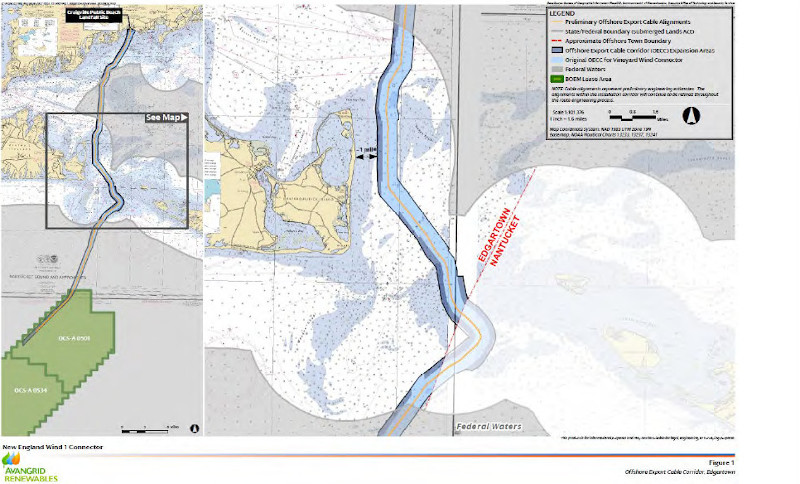 Vineyard Wind 1, which is developing a maintenance and operations facility at the Port of Vineyard Haven, has been granted approval to replace a hangar to house a helicopter at Martha’s Vineyard Airport. New England Wind 1, whose project lease is immediately southwest of Vineyard Wind, has been given the go-ahead to run two submarine cables through the island’s waters.

Both approvals came with conditions attached.

Vineyard Wind’s proposal will be to demolish an approximately 8,500 square foot hangar built in 1973 and located between the private aircraft park and the airport firefighting hangar and replace it with a hangar of more of 9,000 square feet with space for a helicopter, a staff area, bathrooms and storage space. The hangar is intended to serve the 30-year operational life of the wind farm.

The commission asked the company to keep the dismantled hangar for 60 days and release it for reuse. He also demanded that the company make a payment to the Dukes County Housing Authority to mitigate the housing impact of the jobs created by the helicopter operation.

Vineyard Wind initially offered $7,648 as a one-time payment to the authority. This offer was rejected by the MVC, 5-9, in favor of doubling the amount to $15,296.

The biggest payment went 9-2, with Ben Robinson and Trip Barnes in the minority and Ernest Thomas abstaining

Vineyard Wind must also adopt green energy measures for the new shed and submit detailed site plans, including landscaping and lighting, before obtaining a certificate of occupancy.

And although local governments have no authority over flight operations, which are controlled by the Federal Aviation Administration, the company must provide the MVC with a memorandum of understanding with the airport and the FAA regarding noise abatement.

“These helicopters are going to be operating multiple times a day all year round,” Sederholm said.

The plane trip will take about 15 minutes, each way, ferrying workers between the airport and a helipad to the wind farm’s planned electric service platform, according to a presentation by Vineyard Wind at the opening of the VMC public hearing on July 21.

This presentation estimated two to four round-trip helicopter flights per day. During the hearing’s continuation on September 1, Mr. Sederholm noted that the VMC had no say in the number of trips.

“It will take two and a half hours to get there by boat. What do you think they’re going to use to get their people there? ” he said.

Most commissioners agreed that flight noise is an unavoidable downside to the project, but that the potential flow of renewable energy was a benefit that outweighed both the additional air traffic and the impact on housing.

Mr. Sederholm abstained in the final vote, which was otherwise unanimous.

The New England Wind 1 Undersea Connector Project has also prevailed over environmental concerns, with the panel imposing conditions that include a benthic habitat monitoring program following construction of the cable corridor, to document disturbances to the seabed life. New England Wind is a partnership between Park City Wind and Commonwealth Wind.

The proposal is to place two offshore export cables connecting the proposed wind farm to the New England ISO Grid to an existing substation at Barnstable. Vineyard Wind gained approval for a similar project in 2019; the New England Wind cable will include approximately 12.4 line miles in Edgartown waters, roughly the same corridor used for the Vineyard Wind cable. Each cable will be approximately 10 inches in diameter and will sit in a trench approximately 3 feet wide

An updated fishing communication plan and cable decommissioning plan must also be provided to the VMC, along with an agreement to protect right whales and any reports the company provides to the U.S. Office of Wildlife Management. ocean energy.

The cable corridor does not come ashore on the vineyard, noted VMC President Joan Malkin.

“It just crosses our waters… underground,” she said.

Mr Barnes raised the specter of calamity if something went wrong with the cables, which are being installed to export power from the company’s Park City Wind project.

But Mr Barnes failed to secure a majority for his motion to seek a lawyer’s opinion on protecting the island in the event of a problem with undersea cables. The final vote in favor of the proposal was unanimous except for Mr. Barnes, who abstained.