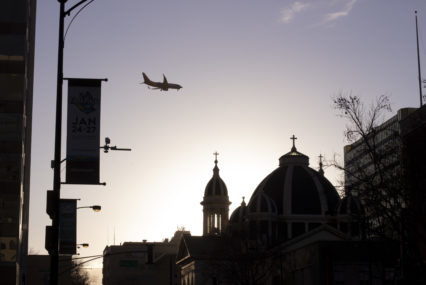 Should developers pay for cranes above the San Jose building height limit?

If you’re planning a trip from San José to Hawaii, you could be kicked off the plane thanks to developers using cranes that exceed the city’s building height limit.

San Jose City Council will hear a proposal on Tuesday that will require developers to pay into a fund if they use cranes higher than the height limit.

Development fee revenue will be used to help ease the blow to airlines being forced to downsize due to Federal Aviation Administration safety guidelines. Money in the fund can be used by the airline to compensate passengers who have been excluded from a flight due to the requirements. Airlines can choose to use these funds to reimburse fares, pay for a hotel, or both.

In 2019, the city council approved taller building heights, up to 35 feet in the city center and up to 150 feet in the Diridon station area, with the aim of generating more revenue through the increase in offices and apartments. But if increasing building heights equates to cranes exceeding height limits, planes near Mineta San Jose International Airport will be forced to fly with fewer passengers.

A committee of the board recommended in March the creation of a fund to offset the combined annual losses estimated at $ 2.8 million for airlines.

In a memo, Mayor Sam Liccardo and council members Magdalena Carrasco and Dev Davis describe this as “difficult compromises” for downtown San José and the airport. The three, however, want to exempt projects that have already applied for building permits and start construction within six months.

The charges will have variable monthly rates depending on the part of the year the cranes are used. Developers will have to pay up to 75% of the costs associated with airline weight penalties, plus a 15% municipal administrative fee before receiving a building permit. The monthly fee billing will be tied to the number of months the cranes are operating above the city height limit. The taller cranes will be reserved for construction from April to September due to airport policies regarding South Flow, when bad weather or a change in wind is less likely.

The Air Line Pilots Association, which represents 61,000 pilots and 33 airlines nationwide, previously said the financial impact on airlines departing from San Jose would be minimal, allaying one of the main concerns of airlines. opponents of taller buildings in the city center.

“It makes development financially more difficult, but if you want to be able to reach the heights that downtown is looking for, that’s something that needs to be taken into account,” Bob Staedler, director of the land use consultancy. Silicon Valley Synergy and Columnist, San José Spotlight said. “It’s definitely a compromise situation which hopefully can result in a win-win.”

The plan may not be suitable for passengers who could be kicked off planes due to flight weight restrictions.

“I feel bad for families taking their kids to Hawaii because it’s a dice game whether you’re going to be pushed around or not,” said Dan Connolly, Chairman of the Airport Commission, speaking in its name, in San José Spotlight. “Granted, it’s only about 15% of the time you have to fly south, but if it’s your family vacation and you’re being pushed around by the restrictions, what will the city do to compensate for this? family ? The city’s position is “nothing” other than what the airline gives them to have to change your flight. “

San Jose City Council meets Tuesday at 1:30 pm Learn more about how to watch and participate.