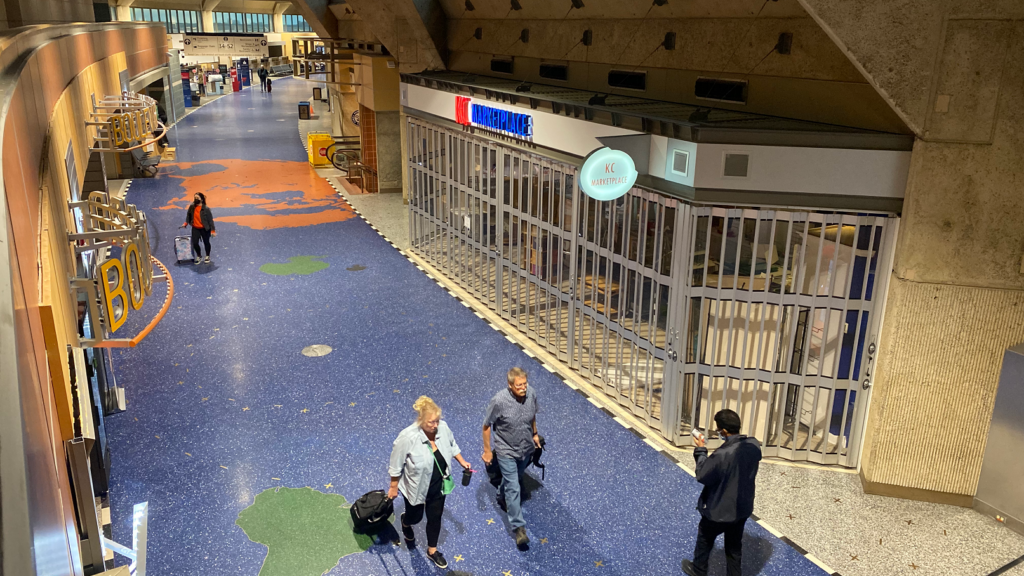 Kansas Reflector welcomes opinion pieces from writers who share our goal of expanding the conversation about how public policy affects the daily lives of people across our state. Eric Thomas directs the Kansas Scholastic Press Association and teaches visual journalism and photojournalism at the University of Kansas.

The cliché about the Kansas City airport was this: Kansas City residents love it, while out-of-town folks hate it.

Right now, it seems like the group of people who hate outgoing airport is, well, everyone.

For years, Kansas Citizens debated whether to replace the aging airport, primarily because of its antiquated concept: three door modules that effectively isolated each terminal. The airport’s new design, comprehensively and breathlessly described by bloggers, will logically organize doors and conveniences. And it will be pretty too.

While waiting for the opening in March 2023 of the new airport means that the existing is doomed to fester and suffer abuse in the meantime. Talk to anyone who has been through the airport recently, and they describe the experience with pity and disgust, as if recounting a visit to a neglected elderly relative.

The terminal is not only dated but also crowded with people. As I boarded the plane today, I weaved my wheeled bag into the gate area after the gate area filled with families and business travellers, looking for a open place to stand. The airport boarding area has become too small, along with other shortcomings.

Toilets offer the ultimate indignity. Your trip to the bathroom often begins with a long queue (especially for women’s facilities) and ends with a request for airing. How, you ask, can this large number of people be served by so few functioning toilets or drinking fountains?

Airport food usually gives the feeling of being deprived of your holiday bonus in exchange for a soggy ham and swiss sandwich. So we should expect Kansas City airport food, on the brink of closing old terminals, to remind us of, well, dismal airport food.

What’s amazing, however, is the lack of options. You won’t find anywhere to store your carry-on for 15 minutes and grab a Miller Light. The only thing more competitive than being at the front of the Southwest boarding party is grabbing a table at Pork and Pickle, the airport restaurant perched above the Southwest gates.

If finding a place for a meal has become a luxury, parking is essential. And good luck.

Our family’s most exhausting encounter was a late night arrival in Kansas City that left us scrambling with hundreds of other people to catch a shuttle to a budget parking lot. We waited — I’m not exaggerating here — 90 minutes for a blue shuttle. And this shuttle waived the privilege of loading into our car to wait another 20 minutes to pay for parking. Leaving the airport took longer than most flights.

It seems that other travelers have given up on economy parking, paying for the parking garages tucked into the hollow of each C-shaped terminal. The lack of spaces in these garages, especially in Terminal B, forced me weaving around the garage, praying I wouldn’t miss my flight as I searched for a seat. Of course, the most convenient garage rates rival your mortgage payment.

Compared to this Dante-worthy haunted house, the new airport looks lavish. The city proudly and smartly marched tour groups through the new Aviation Hall. Groups of executives, students and travel bloggers have visited, and their accounts make the old terminals even more decrepit.

Perhaps my favorite detail is that the new terminal will feature the best thing about previous terminals: the flooring. The terrazzo floor of the old terminals was celebrated (who knew flooring could win awards?) by industry groups and people like me. I remember when my children were young enough to need a stroller, how I rolled them across the smooth expanses of the tile, tracing the arcuate lines.

The kids and I would inspect the medallions that dot the floor. These clever mosaic images brought whimsy and character to a building that otherwise appeared to be a blob of concrete, especially when viewed from the inside.

According to the airport commission, many medallions will be meticulously moved to the new terrazzo flooring in the new terminal. Add to that other planned public art. Saxophones twisted in the shape of birds (or maybe planes) hang above. More, sculptures with musical humor by Georges Rodriguez.

Pictures and reviews of the new terminal show and describe so many improvements over the old one that it seems almost unfair to consider them the same type of building. The adjacent parking garage will accommodate over 6,000 spaces in one location. Drop-off and pick-up will be streamlined with two levels – a design concept shared by nearly all contemporary airports.

Here is a sentence that I would never have imagined writing as a journalist: here is the bathrooms! As detailed on the blog “The Dots Guy”, by Zach Griff: “There are plenty of restrooms in the new terminal, all of which have a green/red light system to indicate if a stall is occupied. There will be a mix of gender-specific and all-gender facilities, and all cabin doors will open outwards – a deliberate design choice by the airport.

Travelers to the region will, it seems, be pleasantly shocked by this new airport and the return of fun to the flying experience.

The nature of impatience is this: once you’re on the verge of something you’ve been waiting for so long, you can’t imagine waiting even a minute longer. Even for a project that is miraculously ahead of schedule – despite a pandemic and decimated global supply lines – we want it now.

Or at least before getting back on the plane.

Through its opinion section, the Kansas Reflector works to amplify the voices of people who are affected by public policies or excluded from public debate. Find information, including how to submit your own review, here.

Mehran Karimi Nasseri, who lived at Paris airport and inspired ‘The Terminal’, has died