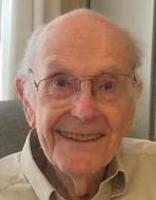 Richard G. Dinning died on July 24, 2022, just months before his 100th birthday. Born in Flint, MI, Richard lived in Pittsburgh, PA, and Washington, DC, before moving near his sons to Massachusetts in 2006.

Richard had a life full of loving friends and relatives and unusual adventures, many of which involved aviation. When he joined the Army Air Corps in 1943, Richard had never been on an airplane. He became a B-17 bomber pilot, flying 34 combat missions over Europe during World War II. After completing his required missions, he voluntarily extended his own tour to ensure his crew completed theirs safely. Rather than telling of his bombardments, one of Richard’s favorite stories was about the return of French POWs after the war ended; he said “there wasn’t a dry eye on the plane” as they crossed the French border. For his service, Richard received the Distinguished Flying Cross and the Air Medal with oak leaf clusters, and the French government awarded him the Legion of Honor.

After the war, Richard attended law school at the University of Chicago, where he met his future wife, Nancy. He spent his career in aviation, helping to develop the fledgling Allegheny Airlines which became US Airways. He has worked with airports across the country to improve their air service and he has been recognized by the Federal Aviation Administration for leading industry efforts to develop relief airports in the most congested areas.

Richard flew his own plane until the age of 83 and was thrilled with the adventures it brought him. He flew for years with the Collings Foundation World War II Bomber Group and may have had more time flying a single engine aircraft in close formation with a B-17 and/or B-24 than any other driver. He has also had many flying adventures with his friends and family, traveling to places like Alaska, the Bahamas and Mexico. After moving to Massachusetts, Richard volunteered as a guide and self-proclaimed “living exhibit” at the International WWII Museum in Natick, where he especially enjoyed speaking to student groups.

In addition to flying, Richard enjoyed supporting young people. While in high school, he worked in summer camps for underprivileged children. In Pittsburgh, he served as president of Big Brothers of Allegheny County and took his own “little brother” under his wing. While living in Washington, he often invited friends of friends to stay with him early in their careers. And later in life, he mentored high school students in the Sages and Seekers program.

But more than anything else, Richard was the master at staying in touch and took great pleasure in supporting the people in his life when they needed it most. He frequently attended graduations and birthdays of loved ones, and he formed lasting relationships with many of the people he met on his travels. After moving to Massachusetts, he became close to a group of friends who called themselves The Idlers, and he had a warm relationship with the residents and staff of Sunrise of Wayland, who gave him support. affectionate in his later years.

Richard was predeceased by his wife, Nancy, and his partner for several years before his death, Tamara Wall. He is survived by one daughter and two sons: Betsy (Dan) Smithyman, of Coral Springs, FL, Greg (Elisabeth) of Shirley, MA, and Michael (Connie) of Natick, MA; and Tamara’s daughter, Cindy from Troy, Pennsylvania. He had five grandchildren, three great-grandchildren and many very special nieces, nephews and their families.

A celebration of Richard’s life is tentatively planned for this fall. In the meantime, the family suggests channeling his spirit by contributing to your favorite charity or reaching out to friends and loved ones like he did so well.