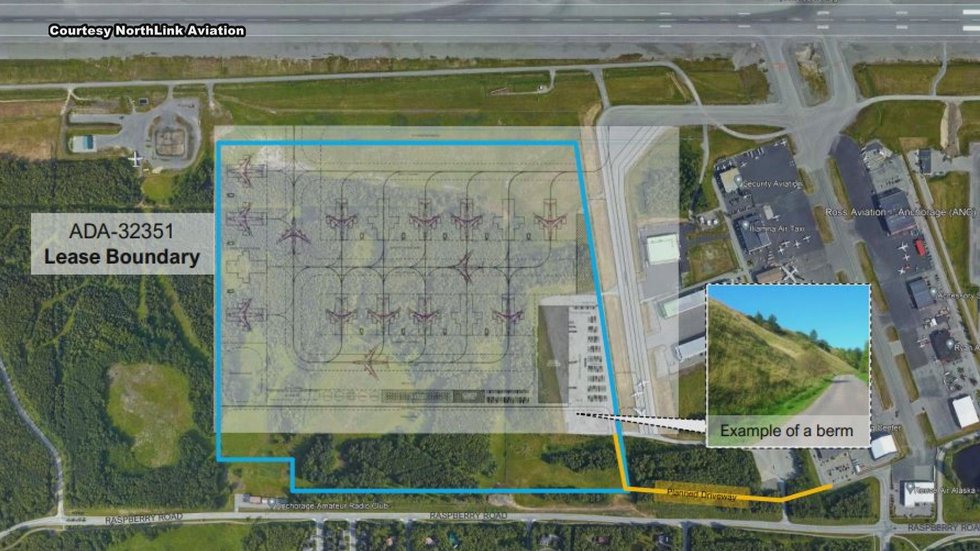 The proposed project would have 15 paved areas in total to park air cargo planes, dual-mouth fueling systems and the ability to recycle the glycol used to de-ice the plane, according to NorthLink.

“Ted Stevens Anchorage International Airport is the 4th busiest air cargo airport in the world, but the airport is facing an infrastructure crisis. There are not enough spaces to park cargo ships passing through the airport,” said NorthLink CEO Sean Dolan. “And we are building the infrastructure to meet the needs of the airport today and in the future.”

Local residents are concerned about the impact of the terminal on their drinking water. Linda Swiss lives in the Tanaina Hills neighborhood near Raspberry Road and has been following the project for the past 18 months with a group of other concerned residents.

“We want the impacts to be well understood,” Swiss said. “We want proper oversight.”

Swiss added that she and 27 other households use individual watering wells and are concerned that the project could put them at risk of polyfluorinated substances or PFAS. NorthLink is working through the Environmental Policy Act approval process and completed public comments on its draft environmental assessment last Saturday.

The Alaska Department of Environmental Conservation left a comment during a review of the draft environmental assessment requesting an extension.

“DEC is requesting an extension to the review period to allow for site characterization and delineation of groundwater contamination by PFAS,” wrote DEC Div. spill prevention and

Response from Tiffany Larson. “So that there is a better understanding of the hydrogeology of the site and the potential risk to domestic water supply wells.”

Larson’s memo also noted contaminated sites near the proposed project area and wanted NorthLink to include surrounding areas in its EA.

“We want to be a good neighbor,” Dolan said. “And we want to work on solutions that help meet people’s needs. That being said, I think it’s important to note that our project will have no impact on groundwater.

Swiss said they’ve met with Dolan and the project’s developers seven times, but they still feel like they’re not being heard. She said they wanted the company to pay for the 28 homes on wells to connect to city water so they were not at risk of PFAS contamination from the proposed project.

“You know, we find these disagreements about the direction of groundwater flow or you know, there won’t be spills, there are spills with aviation operations in general,” Swiss said. “We just don’t feel like there are mitigations in place that will permanently protect our drinking water wells.”

Anchorage Airport declined to comment for this story and asked NorthLink Aviation questions. The Federal Aviation Administration has not responded at the time of this article’s publication.