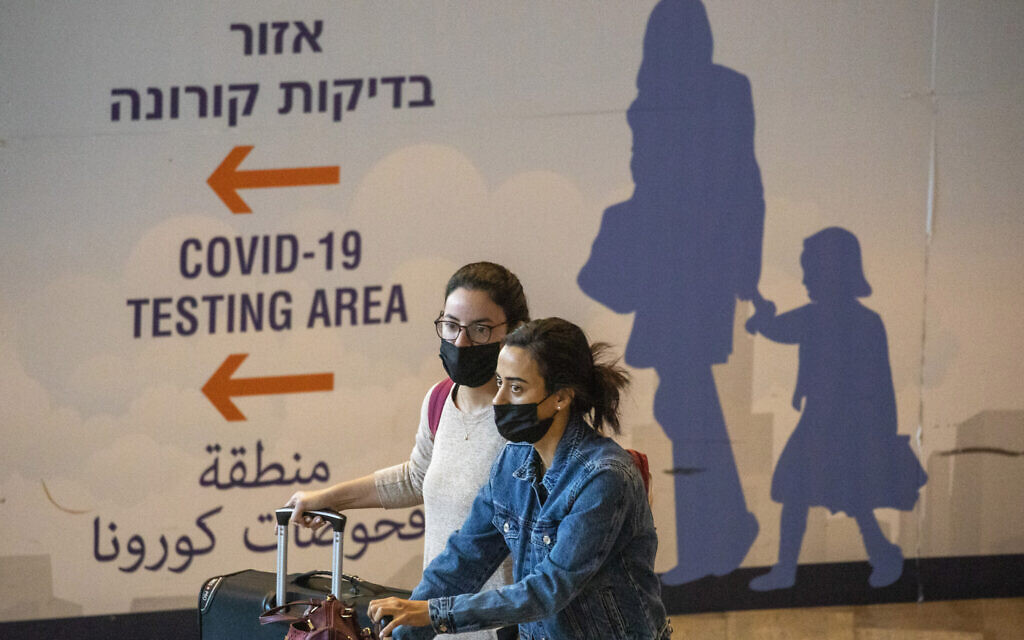 No plan to close airport, officials say, amid fears of new COVID spike

Israeli officials clarified on Thursday that a high-level discussion held earlier in the day about the closure of Ben-Gurion airport in the event of a new virus outbreak does not mean that officials actually plan to limit flights to and coming from the country anytime soon.

During a meeting with health officials on Thursday, Prime Minister Naftali Bennett and Health Minister Nitzan Horowitz received a comprehensive plan to deal with a potential new variant of coronavirus that would involve the cancellation of air travel to destination and from the country and the closure of its borders, among other measures. A statement from the Prime Minister’s Office said the aim of the plan is “to prevent the future strain from entering the country”.

However, discussions of the airport closure at the meeting, which coincided with rising Omicron infection rates and the discovery of a new subvariant in the country, led some to believe that such a decision could soon be proposed.

“The prime minister wanted to make sure that Israel is prepared in the event of a very dangerous variant, in terms of equipment and closing the skies,” Sigal Regev Rosenberg, head of the Meuhedet HMO, told Army Radio.

Health officials have partly attributed the current rise in cases to the BA.2 variant, a subvariant of Omicron. BA.2 is thought to be more infectious than Omicron, but not necessarily more serious.

A woman receives a dose of the COVID-19 vaccine at a Clalit health center in Jerusalem, October 3, 2021. (Yonatan Sindel/Flash90)

Coronavirus czar Salman Zarka told Channel 13 that the BA.2 variant is spreading rapidly and the number of new daily infections could double to 30,000 within a week.

According to the latest data from the Ministry of Health, the reproduction rate, or R number, has increased to 1.42. The figure represents the number of people each coronavirus carrier infects, with any reading above 1 indicating that the virus is spreading. The R number was below 1 a week ago.

The ministry said 13,603 new infections were confirmed on Wednesday, with 19.08% testing positive.

Active cases stood at 66,821, including 786 people hospitalized with complications from COVID. The number of serious cases remained stable at 301, including 130 on ventilators.

The death toll was 10,455, with the Health Ministry reporting 27 coronavirus deaths in the past week.

Channel 13 reported that officials fear the current trajectory of the virus could lead to a massive outbreak during the upcoming Passover festivities, which for the first time in two years will go ahead without restrictions.

Officials are most concerned about the part of the population that has not been fully vaccinated – those who have not completed their three-dose regimen or those over the age of 60 who have not received their fourth injection – who could trigger a new epidemic, the report says.

The Ministry of Health announced on Thursday a new vaccination campaign for citizens aged 60 and over who have not received a fourth dose.

Zarka said there were no plans to impose rules that would prevent families from spending Passover together next month.

“There is no reason to mark the holidays on Zoom, we are not there anymore. We will celebrate together, without it ending in illnesses,” he told the Kan public broadcaster.

He also argued that the vaccine remains the strongest tool against the virus and urged those who have not yet had their shot to do so.

Zarka also announced that a case of Omicron’s BA.3 subvariant has been discovered in Israel for the first time.

He told Army Radio that only one such case has been confirmed so far.

Little is known about the strain, which joined the Omicron BA.1 and BA.2 subvariants. The WHO said earlier this month it was tracking BA.3, first identified in South Africa in January.

If so, we have a request.

Every day, our journalists aim to keep you up to date with the most important developments that deserve your attention. Millions of people rely on ToI for fast, fair and free coverage of Israel and the Jewish world.

We care about Israel – and we know you do too. So today we have a question: show your appreciation for our work by join the Times of Israel communityan exclusive group for readers like you who appreciate and financially support our work.

Yes I will give

Yes I will give

You are a dedicated reader

We’re really glad you read X Articles from The Times of Israel over the past month.

That’s why we started The Times of Israel ten years ago – to provide discerning readers like you with must-read coverage of Israel and the Jewish world.

So now we have a request. Unlike other media, we don’t have a paywall in place. But since the journalism we do is expensive, we invite readers to whom The Times of Israel has become important to support our work by joining The Times of Israel community.

For just $6 a month, you can help support our quality journalism while benefiting from The Times of Israel WITHOUT ADVERTISINGas well as access Exclusive Content only available to members of the Times of Israel community.

Thank you,
David Horovitz, founding editor of The Times of Israel