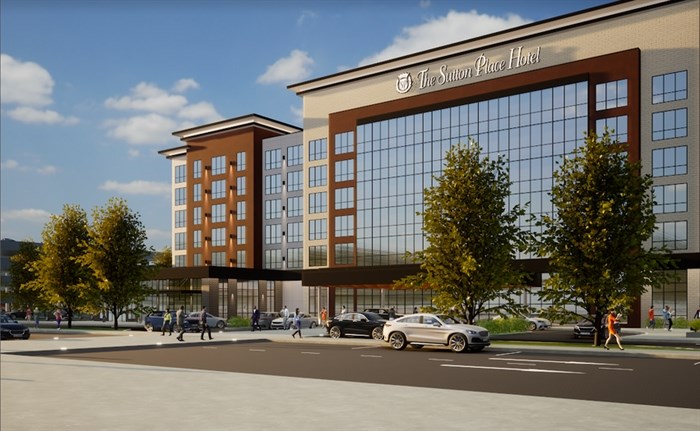 New hotel will take Kelowna airport ‘to the next level’: director | infonews

Artist’s impression of the new Sutton Place Hotel at the Kelowna Airport.

The first hotel on the Kelowna International Airport property will be the Sutton Place Hotel owned and operated by Northland Properties of British Columbia.

The six-story hotel will have 230 to 263 rooms with a four-diamond rating, Kelowna Airport Manager Sam Samaddar told iNFOnews.ca today, September 29.

“When you look at airports and airports that go to the next level, these are the kinds of amenities that add to the facility,” he said. “Look at the top eight airports in the country and they all have hotels right next to your property.”

It will be built opposite the expanding terminal building, in the area where car rental and short-term parking are now located.

Details on who will operate what a City of Kelowna press release calls an “award-winning” restaurant have yet to be worked out.

It will have a business center, spa, concierge and bellhop services, and meeting rooms.

Plans are to begin construction late next year with an opening date of 2026.

The city issued a call for expressions of interest last October for a long-term lease with a proposed price of $10 million. He requested 100-200 rooms, so the final project will be bigger than originally planned.


READ MORE: Price set at $10 million for the right to build a hotel at Kelowna airport

Samaddar did not provide details on the cost or duration of the lease, but said those details would be forwarded to the city council on Monday.

It will be built and operated by British Columbia-based Northland Properties, which was started by Bob Gaglardi in 1993 with a Sandman Inn in Smithers. Tom Gaglardi is its current CEO.


To contact a reporter for this story, email Rob Munro or call 250-808-0143 or email the editor. You can also submit photos, videos or news tips at the newsroom and be entered to win a monthly raffle.


We appreciate your comments and opinions on our stories, but play well. We will not censor or delete comments unless they contain off-topic statements or links, unnecessary vulgarity, false facts, spam or obviously fake profiles. If you have any concerns about what you see in the comments, email the editor in the link above.