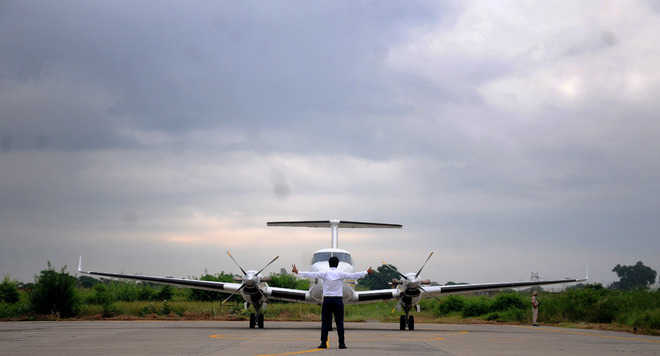 MP Santokh Singh Chaudhary said on Wednesday he would meet Union Civil Aviation Minister Jyotiraditya Scindia in New Delhi to urge him to resume flights from the civil terminal at Adampur airport.

He visited the airport to take stock of the progress of the construction of the terminal building and other works in progress. Inspecting the site accompanied by officials, he said he was satisfied with the work and asked them to complete it on time.

As for the resumption of commercial flights from the airport, the MP said that due to the Covid-19 pandemic, flights had been suspended by the government, but now was the time to restart them as people in the Doaba region felt the need to travel to cities like Delhi and Mumbai for their work. He said he would raise the matter with the Minister of Civil Aviation shortly.

During the review meeting, Airport Manager Kamaljit Kaur, ADC, Urban Development, Aashika Jain and heads of various departments briefed the MP on the ongoing works at the airport. Officials informed him that work on the new terminal with apron and taxi lane would be completed by the end of June.

The MP said the new terminal will improve passenger capacity during peak periods and provide them with basic amenities.

Regarding the drainage problem outside the airport boundary wall, officials said it was usually filled with silt and wild vegetation causing water to overflow during the monsoon season. The airport manager had recently written to the Department of Water Resources to clean up and extend the drain from the Kandola village puddle to the main stream at a distance of 1.7 km towards the Mehtiana side.

Chaudhary also instructed the officials to put up proper traffic signs on the roads on the Jalandhar and Phagwara sides.

Savvy travelers can stop wildlife trafficking from SEA Airport and beyond