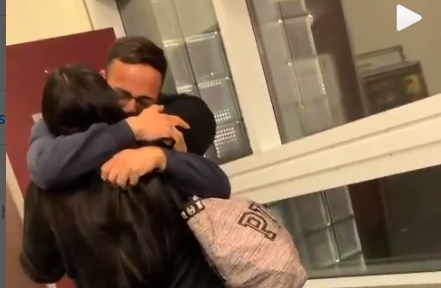 MILWAUKEE (CBS 58) — Love is in the air this month, and it’s not just between married couples or people who are dating.

A heartfelt reunion between a mother and son at Mitchell International Airport (MKE) in Milwaukee has captured the attention of millions on social media.

Maria Gonzalez pulled out her phone to record as her fiancé Jose De la Cruz Nunez was about to reunite with his mother after not seeing her for three years. Nunez had no idea his mother had come from Puerto Rico. It was around midnight when he was sleepily waiting for his future brother-in-law’s flight to land.

“I didn’t expect him to break down. I expected him to cry or cry a little bit,” Gonzalez said. “He says his heart stopped. He didn’t expect it.”

It had been three years, and Gonzalez had arranged the reunion as a surprise.

Once Nunez sees his mother, he cannot hold back his emotion.

“Do you know this person? Gonzalez asks Nunez in the video. It takes him a minute before he bursts into tears.

The video was shared by accounts like Upworthy. It has millions of views and shares.

Gonzalez says she’s shocked that so many people had such a strong reaction.

“There are people who talk about how they miss their mom and how that makes them want to rekindle relationships with their mom,” Gonzalez said. “I’m shocked, too.”

It’s a universal sentiment that many have felt over the past two years as the pandemic tears families apart. Gonzalez thinks that’s part of what resonated with people.

“We can’t meet or see our family as often, but on top of that I think we all have a thing for our mum, and it’s not every day you see a man crying.

The family lives in Green Bay. Gonzalez said that throughout the two-hour drive from the airport, Nunez held his mother’s hand.