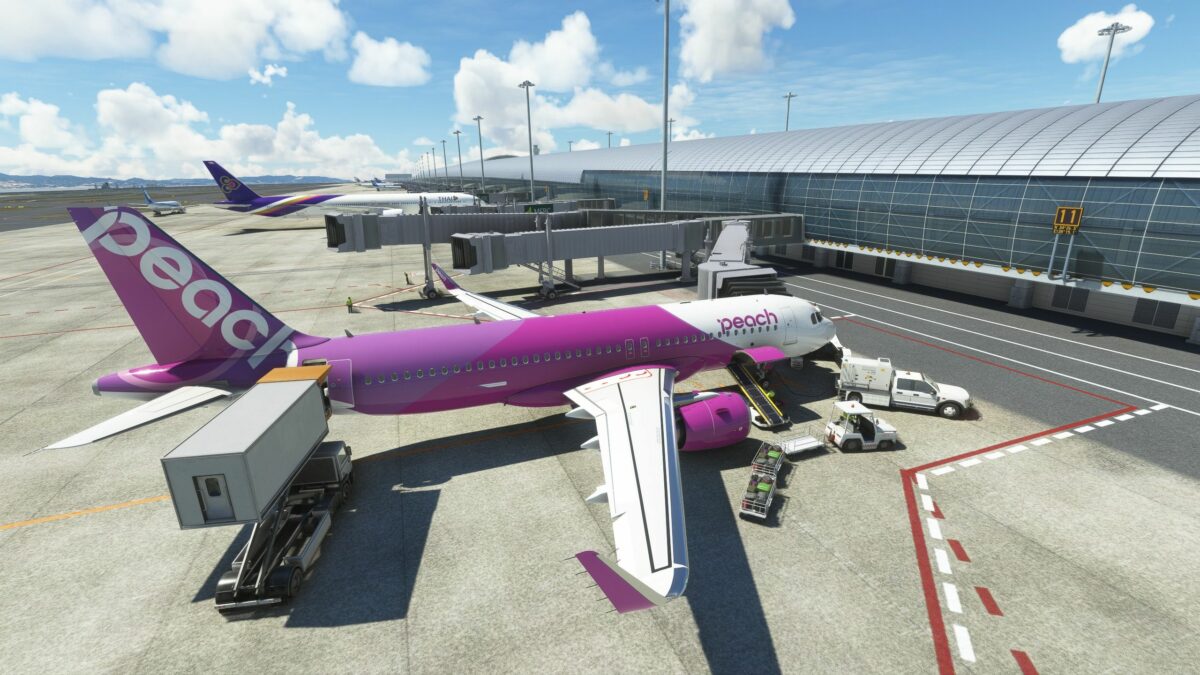 As the largest international hub serving the Osaka area and western Japan in general, Kansai is certainly a relevant airport if you enjoy flying to Japan. Not only does it host many international flights to and from the country (passengers and cargo), but also many domestic flights to a wide variety of destinations.

Its position on an artificial island quite far from the shore makes it rather unique, alongside the beauty of the world’s longest airport terminal designed by the famous architect Renzo Piano.

It’s currently available on Simmarket and the official in-sim market for $19.99 plus applicable VAT, but it’s worth mentioning that it won’t work on Xbox at this time.

If you want an in-depth look at the landscape, you can watch an ILS approach and landing on Runway 06L in the first video above, and a full flyby in various lighting and weather conditions in the second video below. Keep in mind that the landscape does not have a static plane. The airliners you see here are part of dynamic AI traffic solutions from a few third-party developers.

Speaking of AI traffic, the airport generally works well with it, with planes navigating flawlessly from gates to all runways despite the complex layout.

On the other hand, the gates haven’t been properly assigned to airlines, so the AI ​​plane will park pretty randomly (but you have to admit, this is a feature that’s not yet widespread among developers). Another issue is that the cargo ramps were not properly labeled as such and were instead identified as general aviation, which causes some issues with the use of a dedicated cargo AI.

The published SIDs and STARs are ready to use and correspond to the graphs, and the same applies to the instrumental approaches. The PAPI lights are also correctly calibrated on each track.

The taxiways are all set up as they should be, with all ramps numbered appropriately. All ground services are also available (including the elusive tankers), so we envision a functionally very sound airport.

The orthophoto used as the base for the airport man-made island is adequate, if a bit blurry in some places. Still, an absolutely fantastic job has been done with terraforming. Developers often find it difficult to work with man-made islands due to their precise shapes clashing with the organic terrain, but here the shores of the islands are beautifully shaped and refined, while a great job has also been done. on the roads that pass under the traffic lanes and join the two tracks.

Technobrain also correctly modeled additional elements like the piers extending to the threshold of runway 24L and their lighthouses (although the ferry docks are unfortunately missing), the massive bridge connecting the airport to southern Osaka (and its modeling is particularly exquisite), and the tanker mooring off runway 06R.

One thing that seems a little underdeveloped is the tetrapods along the breakwaters that line the island’s borders. In the real world, these are very iconic elements of this type of airport, but the developers used them sparingly, resorting to a flat texture instead.

I understand that implementing them all would probably have been problematic in terms of performance, but other Microsoft Flight Simulator developers (even freeware) have managed to create low polygon/resolution tetrapods which are still very compelling and very performing. I’m sure a developer with Technobrain’s experience and skills should be able to strike a better balance on this.

The texturing of the tracks and taxiways is absolutely excellent, with beautiful and precise details. All the markings that I have been able to verify are basically perfect, including the most subtle ones. They are also beautifully applied – precise but not cartoonish. This is definitely one of my favorite aspects of the airport.

Moving on to the iconic air terminal building, the modeling and texturing of the exterior is fantastic – clean yet realistic, with just the right application of weathering and physical rendering.

Unfortunately, there’s no interior modeling, with limited use of parallax shaders instead. This is, in my opinion, the weakest point of this decor. Super detailed interior modeling isn’t something I consider mandatory for all airports (although most top developers have achieved great results), but the Kansai has absolutely huge glazed areas right in front of you when you are parked at the door.

Due to the very nature and architecture of the airport, I would say that at least some limited interior modeling would have been basically mandatory to achieve the best effect.

On the other hand, the catwalks look great, with top-notch modeling and texturing (to the point that you’ll even see details like the air conditioners inside) and animations that work really well.

One thing that may bother some is that the logos of real-world companies like the ubiquitous SMBC have been changed (to MSBC) likely to avoid branding issues. This is something that Technobrain seems to be particularly sensitive to, despite the fact that most other developers have been using real logos without fear of repercussions, and have been for decades. Fortunately, a mod has already been released to fix this problem.

The superb modeling and texturing of the airside areas of the terminal extend landward, with great attention to detail, to the station and the architecture of the Nikko Hotel. Unfortunately the hotel branding is also lacking which is a shame.

Animated trains complete the terminal and I love the detailing done under the elevated access roads. This is very rare in an airport of this size on Microsoft Flight Simulator.

All of the other buildings also feature a similar attention to detail, with excellent modeling, weathering, and PBR application across the board. Hangars, warehouses, ATC towers, radars and offices all look great.

A missing element that I think would have made the airport even better is the railway line that connects the airport. Its power poles are pretty noticeable in the real world and are missing here, with the tracks simply painted over the ortho. This is rather odd, considering the railroad is nicely modeled across the bridge, but doesn’t extend all the way to the station when it reaches the island.

Probably one of the best features is the Sky View aviation theme park and its viewing platform, with a fantastical and almost realistic interpretation.

I also really appreciated the approach of the luminous bridges. Not only do they look awesome, but they have their own custom lights that work really well.

Night lighting is a bit uneven. While ideal for runways, taxiways, and aprons, the terminal is poorly lit, compounding the problem of lack of interiors.

Snow cover is average, but not terrible, with Microsoft Flight Simulator’s own approach to modeling snow depth based on the color of base materials, making it very difficult for developers to achieve a good effect on this front. On the other hand, Kansai Airport looks great in the rain.

Performance is very generous. My PC (RTX 3070, Ryzen 9 3900x, 32GB RAM) at 1440p resolution and ultra graphics settings only loses 5-6 FPS, despite the huge difference in fidelity (as you can see above) . That being said, this tells me that there would have been some overhead that could have been used to add more detail like better tetrapod coverage, the interior of the terminal, the railroad and the docks.

Ultimately, Technobrain’s Kansai Airport for Microsoft Flight Simulator comes with high quality and plenty of positives, but it lacks a few things that would make it a truly top-notch product.

That being said, it’s still by far the best representation of this important passenger and cargo hub available for the SIM card, so it’s very easy to recommend if you like flying in Japan.