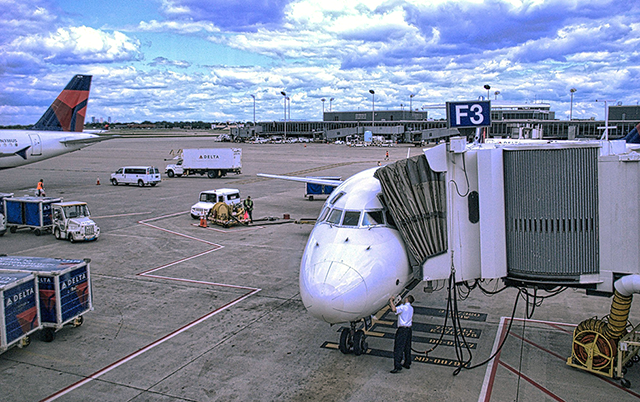 How Often Planes Hit Birds (And Other Animals) In Minnesota

Have you ever heard a small thud when you take off from an airplane? Maybe it was a bird.

Since 1990, the Federal Aviation Administration has recorded more than 2,570 “wildlife strikes,” or instances of planes hitting animals, at Minnesota airports. The data shows collisions with all kinds of wildlife: mostly small and medium-sized birds, but also bats, coyotes, foxes, deer and an unfortunate muskrat.

In most cases, these strikes are not safety issues for aircraft or passengers. But the FAA tracks wildlife strikes because they can be costly and, in extremely rare cases, dangerous.

The article continues after the ad

The plane eats the crow

Just as car drivers have had to worry about wildlife on the road, airplane pilots have worried about animals on runways and in the skies for as long as people have been flying, said Brian Willis, chief safety officer. airline at the University of North Dakota Aviation Department.

Although not necessarily something passengers are aware of, wildlife collisions can pose safety concerns in very rare cases and can be costly, both in terms of delays caused by grounding aircraft deviation and cost to repair them.

Reported costs of wildlife strikes in the Minnesota database have exceeded $11 million in inflation-adjusted dollars since 1990.

The costliest wildlife strike in the Minnesota database occurred in Minneapolis-St. Paul International Airport in June 2012. According to the report, a Compass Airlines plane struck an American coot, causing sparks to fly from the engine, which failed. The plane landed without incident, but estimated engine replacement costs were $5.9 million in inflation-adjusted dollars.

The second costliest, at $1.5 million, occurred when a crow struck a Northwest Airlines plane at MSP in 2002. The report said a loud thud was heard before an odor of Burnt meat doesn’t fill the cabin. After consulting with the expedition, the plane continued to Chicago’s Midway Field (the plane was carrying the Chicago White Sox baseball team). After landing, damage was found in the compressor blades and the engine.

Even if a plane hits a small bird, protocol dictates that the plane must be inspected before flying again, Willis said.

Most of the time, wildlife strikes are inconsequential. However, there are exceptions. The most famous recent example is the 2009 US Airways Flight 1549 incident, when pilot Chesley “Sully” Sullenberger landed a plane in the Hudson River after both engines were knocked out by a herd of geese (large planes usually have multiple engines, so Willis said the fact that it removed both makes it a one in a billion thing). Two people died in a 2007 UND plane crash in Minnesota after their plane hit geese.

Willis pointed out that such cases are extremely rare (you’re much more likely to die in a car crash than a plane crash), but said the potential danger is why pilots learn the safety of wildlife at flight school. It’s also why airports spend a lot of time and money trying to keep planes from hitting animals.

“I think there are a few airports in Alaska that have dogs,” Willis said. “Their job is to scare the birds off the trail.” (Just look at this border collie who chases birds and wears glasses.)

The article continues after the ad

The vast majority of wildlife-aircraft collisions at Minnesota airports involve birds. In the FAA’s dataset, 2,483 of Minnesota’s 2,570 wildlife strike reports — or 97% of them — were related to birds.

The bird species involved was not identified in approximately 40% of bird-related incidents. But among the impacts identified, Horned Larks, Barn Swallows, Canada Geese were the most common. Aircraft have also struck gulls, ducks, owls, eagles and, in one incident, a loon.

More specific species identified in strikes — like Franklin’s gulls and chimney swifts — aren’t necessarily indicative of pilots’ birding skills, Willis said. These are likely attributable to the fact that bird specimens are sometimes sent to the Smithsonian for identification.

Besides birds, the most frequently identified species in collisions are bats (41 incidents), followed by deer (26), coyotes (8), foxes (3) and skunks (2). There are unique reports of collisions with muskrats, hares, raccoons. Luckily for the Minnesota pilots, no moose (as reported in crashes in Alaska).

A Minnesota wildlife strike report describes how a plane, during a twilight landing at Anoka-Blaine County Airport, struck two deer. It was damaged and had to be towed off the runway.

“Once you’re on the trail and going a hundred miles an hour, if there’s a deer there, you’re not going to veer off the trail and avoid the deer,” Willis said. . “You’re going to take the animal, because it’s safer than trying to swerve – that would cause a whole bunch of other problems.”

In terms of timing, collisions between wildlife and aircraft are most common during landing, but also often occur during take-offs and climbs – these are times when aircraft are at the same altitudes as birds tend to be. They are also more common in the fall, during the mass bird migration.

MinnPost’s in-depth, independent news is available to everyone for free – no paywall or subscription. Will you help us keep it that way by supporting our nonprofit newsroom with a tax-deductible donation today?