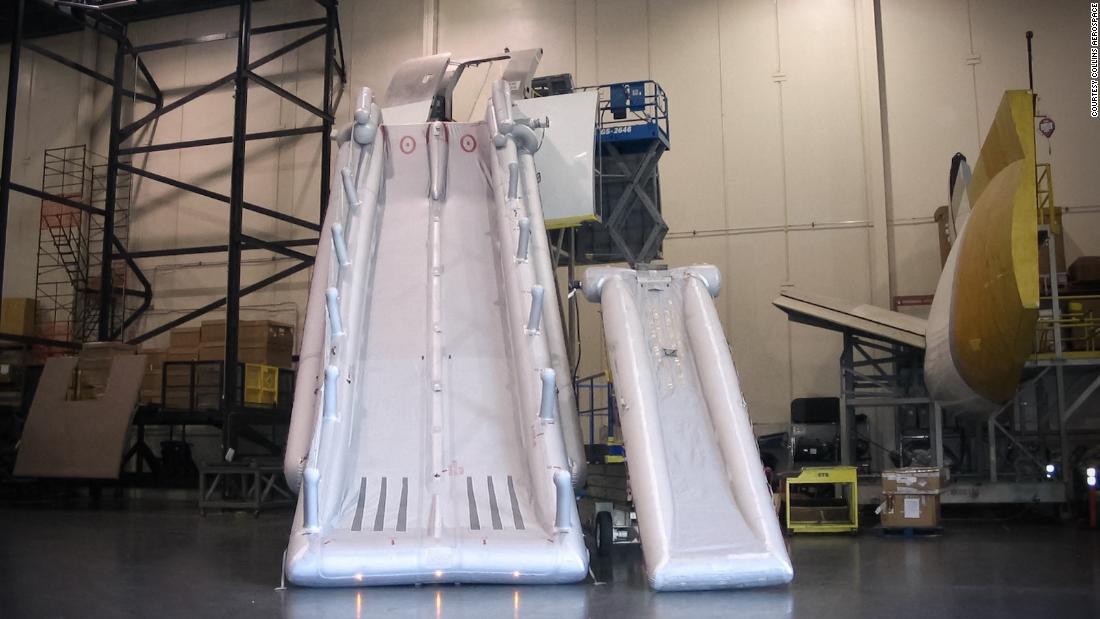 Almost every airline passenger heard this instruction given by a flight attendant over the public address system, just before the plane left the terminal gate.

For most travelers, this is part of the pre-flight ritual that often fades into the background, along with the safety briefing.

But this command is integral to the safety of passengers and crew, preparing a critical device for immediate activation – the aircraft’s evacuation slides.

In the event of an emergency on the ground, inflatable slides deploy from the doors and overwing exits, providing passengers with a quick way to escape from an aircraft. It’s a technology that has its roots at the dawn of the jet age in the 1950s, but was preceded by a much simpler escape solution.

The very first passenger land planes all shared one common feature: a tail wheel. These early aircraft from Ford, Fokker and de Havilland, and later Douglas and Boeing, typically had a door near the tail of the aircraft, near the ground.

Passengers climbed a few steps, then headed to their seats, with the cabin tilted upwards toward the cockpit. If an evacuation was ordered by the captain, passengers could exit through the main entrance door.

As commercial aircraft grew in size, the tail wheel configuration became unwieldy for larger passenger and cargo loads. Aircraft fitted with nose wheels were introduced, leveling the cabin to the ground, but requiring a long staircase to access the entrance doors.

In an emergency, passengers were unlikely to be able to safely jump from the cabin to the ground, so a crude solution was developed.

“The first method of evacuation on airplanes was ropes with knots, to get people out, and that was long before slides existed,” says Tony Pope, chief evacuation systems engineer for Collins Aerospace.

“Then they imagined flat pieces of fabric stretched between two arms, which you had to hold to slide people. They called them slides and we still call our slides slides today.”

These simple fabric chutes evolved into today’s sophisticated slides, which are inflated by a compact compressed gas cylinder.

But tied ropes can still be found on aircraft flight decks, available to pilots if they need to evacuate through cockpit windows or the emergency hatch.

Collins Aerospace and its predecessor company, Goodrich, have designed and manufactured inflatable slides for decades, dating back to the 1960s Boeing 747, the “queen of the skies”.

While materials and manufacturing techniques have naturally evolved since the first slides were introduced, the basic concept and design of today’s escape slides hasn’t changed much, according to Pope.

On the left is an evacuation slide for an Airbus A380. The one on the right was designed for a Boeing 737.

When a slide is designed, careful consideration must be given to the procedure used to pack it into its enclosure on the plane – a process akin to packing a parachute.

“When we do a new slide development program, we have a team of highly skilled technicians who have done most of their careers. We rely on them to develop the packaging diagrams and we write detailed instructions,” explains Pope.

The United States Federal Aviation Administration has developed a set of requirements for slides, which have changed over time as emergency deployments have occurred, giving regulators actual incidents as a benchmark.

Specifications cover all aspects of the design, including fabric strength, flammability and heat resistance, emergency lighting and maximum inflation time – between six and 10 seconds – depending on the location of the the slide.

They must deploy properly in all weather conditions, as cold as -40F and as hot as 160F, in rainfall up to one inch per hour and with 25 knot winds hitting the slide from angles of 45 degrees around the aircraft.

Passenger planes with a door sill more than six feet above the ground must be equipped with a slide, and long-range jets typically carry slides with built-in life rafts.

The shape of an airplane has a direct impact on the design of its slides, with each “slide” usually being unique for its location.

“We are sometimes able to put the same slide on multiple doors, but that is not the norm. Usually the plane has an outline, and we have to design our inflatables to meet the outline requirements and attach properly to the plane in all the extreme conditions that we have to meet,” says Pope.

The double-decker Airbus A380 proved to be a challenge for Collins. The mega-jet has a total of 16 slides – eight on the upper deck and eight on the lower deck.

The designers had to ensure that the slide configuration fit together, so that the upper and lower deck slides did not interfere with each other. Space constraints for blade storage also required special consideration.

“It went through an incredible amount of testing. We would test a door position on an A380 a thousand times. business world. development for Collins Escape Systems.

“Simple is better, but on the A380 we just didn’t have the space to install a conventional system and make it practical. We had to come up with a unique design for the inflation system.”

The shape of an airplane directly impacts the design of its slides.

Collins, in conjunction with aircraft manufacturers, must demonstrate that all passengers and crew can evacuate an aircraft in 90 seconds or less.

“We have an evacuation rate test, where we demonstrate that the slide can handle evacuees in various conditions, such as with a high door threshold, a low door threshold, or in nighttime conditions. We test trained evacuees, we test naive evacuees, and make sure they’re wearing the right shoes and they’re properly dressed,” says Pope.

Like so many safety-related aviation technologies, escape slides are rarely seen by passengers, but can save lives when needed. And that motivates the Collins team, adds Pope.

“I love what we do, building safety equipment. We don’t want to see it used and we hate the situation it’s used in. But when we see it being used, we show it to our employees and they see what they do is really important, it gives us all a sense of pride.”