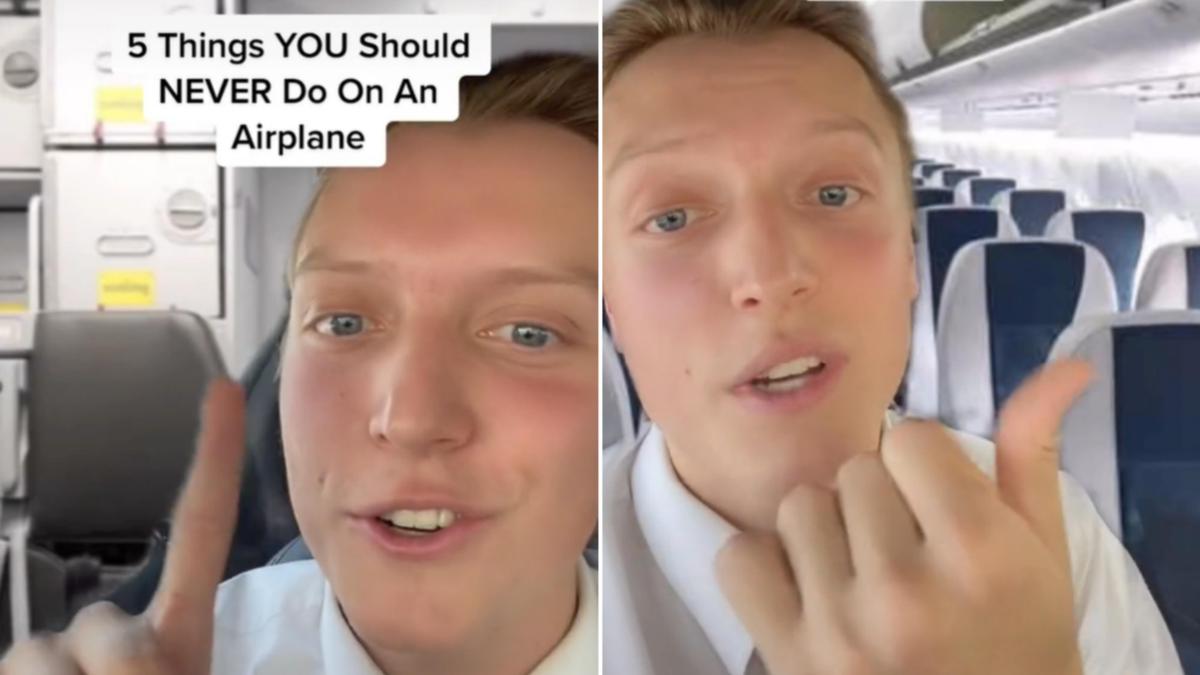 A flight attendant has lifted the lid on seven things passengers should never do on a plane.

Tommy Cimato, from the United States, warned travelers of little-known areas covered in germs to avoid, including the window and the toilet flush button.

For more lifestyle news and videos, check out Lifestyle >>

The cabin crew member said one of the things passengers should never do is fall asleep or lean their head against the window.

“You’re not the only one who did this and you don’t know how many adults or kids wiped their hands or other things all over the window,” Tommy said in a viral TikTok video.

When using the bathroom, he said you should never touch the flush button or lever with your bare hands.

“It’s obviously super unsanitary, it’s pretty gross, so when you flush, use a towel or tissue that’s in the toilet,” he said.

Before boarding, Tommy suggested wearing long pants for the flight.

“Don’t wear shorts when you’re on a plane,” he warned.

“It’s the same as the window – you never know how clean it will be. So if you wear trousers you will have less germs.

During the flight, he suggested keeping your shoes on at all times.

“Never go barefoot, don’t take your shoes off, the floors are dirty,” he said.

“I see so many people doing this and it’s just not hygienic, don’t do it.”

For safety reasons, Tommy said passengers should never get up during turbulence.

“You could hurt yourself and that should be taken seriously,” he explained.

“The captain or flight attendant will always try to let you know if they expect turbulence.”

Tommy said passengers should never snap their fingers for a flight attendant’s attention.

“Don’t make fun of the crew. You shouldn’t do that in general, but to get someone’s attention (by snapping your fingers) you don’t need to do that,” he said.

“The unlikely event that something happens, if you pay attention to it, you have an 80% better chance of surviving,” he said.