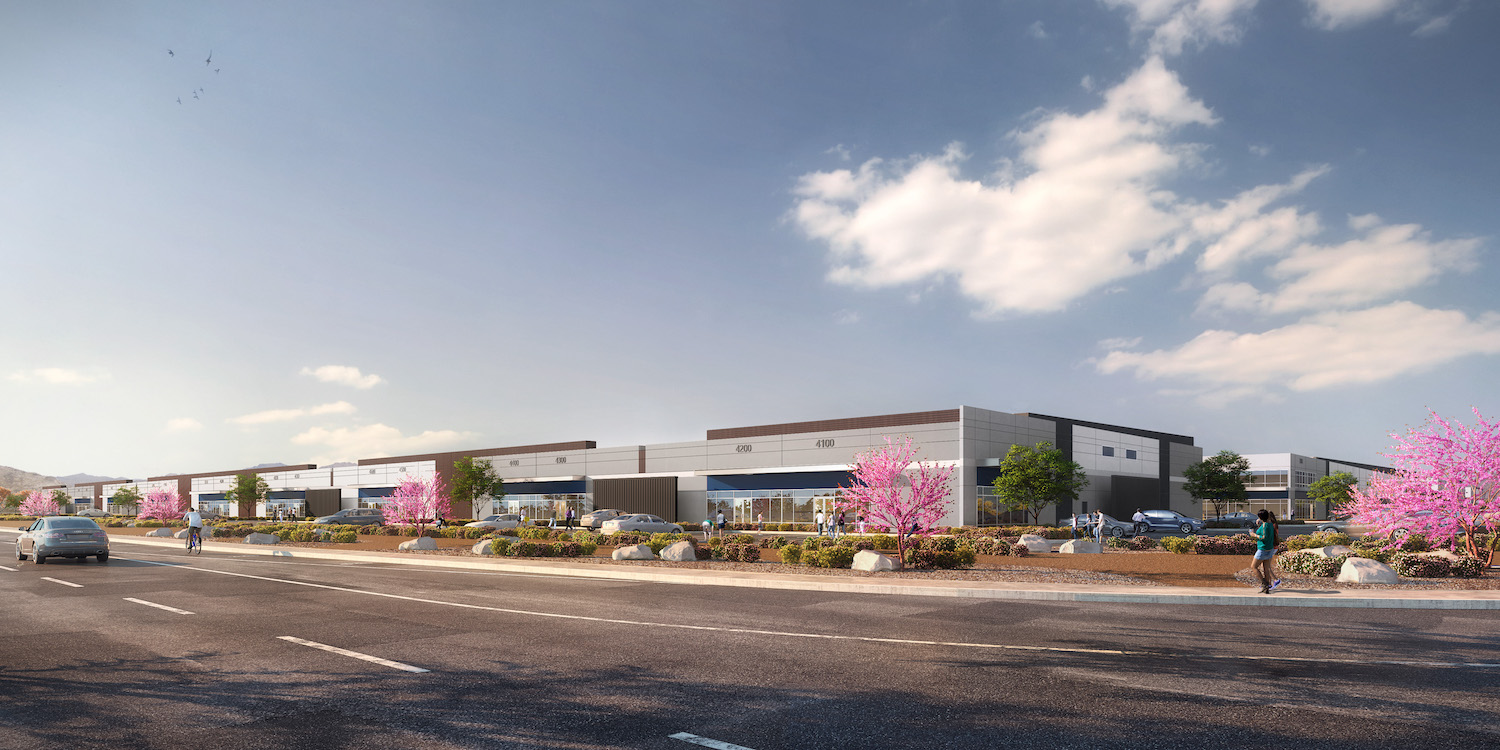 The large tree-lined lot just south of McCarran Boulevard near the airport, vacant since the 1980s, will soon give way to a flexible, industrial infill center by Tolles Development Company.

Airway Commerce Center will consist of four buildings totaling 890,000 square feet, said Kyle Rea, chief operating officer of Tolles Development Co. TDC entered into a long-term ground lease with the Reno-Tahoe Airport Authority, which is essentially the owner. TDC, meanwhile, will own all vertical enhancements to the site.

“It’s an amazing filler opportunity,” Rea said. “The site is not suitable for very dense uses, such as multi-family buildings, retail or many offices. Since it’s just below the flight path, there are limits to the density. There will be fewer employees and this is certainly not appropriate for high density multifamily.

The triangle-shaped parcel of land is enveloped by Airway Drive to the west and Louie Lane to the east. McCarran Boulevard to the north faces the largest section of land, which was once a busy housing estate. However, after receiving numerous noise complaints – the package is directly under the airline’s flight path at Reno-Tahoe International Airport – the airport bought all the houses and demolished them in the 1980s. , Rea told NNBW.

The 185 trees still standing on the site are all that remains of the former Home Gardens housing estate. Rea said about 150 trees will be felled — many are diseased and dying, he noted — while the rest were incorporated into the Airway Commerce Center’s final design.

“We shifted our design to accommodate and retain as many trees as possible,” Rea said. “And 440 new trees will be planted at the site that will be a mix of FAA-approved species that are also drought-tolerant to encourage water conservation.”

Tolles Development Co., had long been eyeing the plot, Rea added, because it’s extremely rare to find so much developable land in the urban core. The airport initiated a process to seek proposals for the site, and after several years and numerous site plan revisions, TDC was selected to develop the Airway Commerce Center.

The vertical build will be financed through a combination of private equity investments and bank financing, Rea noted. The turmoil caused by rising interest rates and falling real estate values ​​made the financing process slightly more complicated, he added, but in the end, the merits of the project outweighed the potential risks to investors. private and institutional investors.

“In June, when real estate values ​​across the country took a 10-20% correction, it kind of shook up our funding process,” Rea said. “But it’s an industrial filler in the city center. It’s just in high demand – there aren’t enough in Reno to support our growing population. Having just about the perfect location and building what the market really needs won the day by bringing our financial partners on our side.

Rea told NNBW the airport had moved forward with site development plans in part to increase and diversify its revenue streams. Reno Tahoe International Airport communications officials did not return NNBW’s requests for comment on the project.

Spaces in the smaller flex buildings will be divisible up to 5,000 square feet, while the larger industrial building could be subdivided or leased to a single tenant, Rea said. Eric Bennet, senior vice president of CBRE’s industrial services team, will handle tenant leasing at the Airway Commerce Center.

The new development not only addresses a strong demand for quality smaller industrial space in Truckee Meadows, but it also provides employment opportunities for small and medium sized light industrial space businesses that are located in the core urban and closer to services rather than the outskirts of town, Rea said.

“It’s a great project to keep well-paying jobs in the center of town,” Rea said. “It does not tax the infrastructure of our city and county. We are happy to provide a platform for small businesses to provide high paying jobs for inner city workers. »