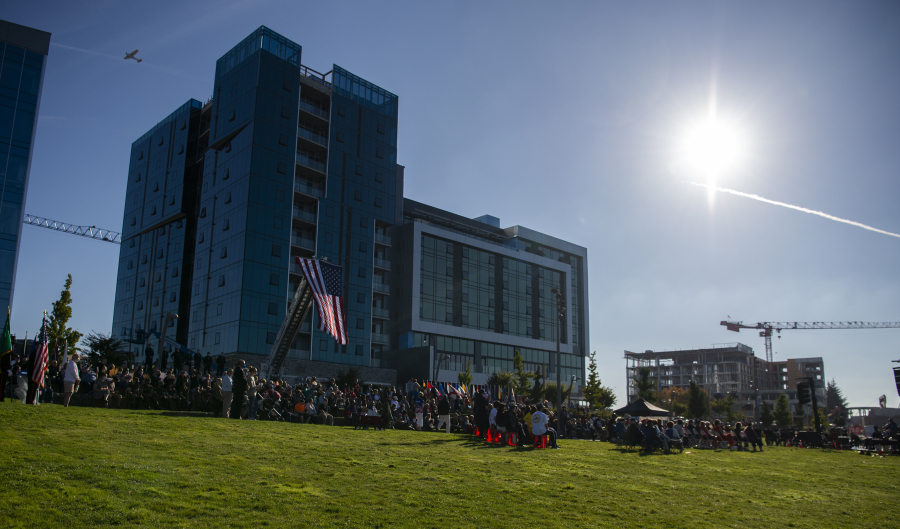 Bagpipes rang, doves took flight and fighter jets roared above their heads as residents of Vancouver and Clark County commemorated the 20th anniversary of the September 11, 2001 terrorist attacks in of a ceremony held Saturday morning at the city’s Waterfront Park.

The event, hosted by the city and the Community Military Appreciation Committee, began at 9 a.m. when committee co-chair, retired Col. Larry J. Smith stepped onto the podium to welcome the crowd of approximately 400 people who had gathered at the park. main land and on the surrounding sidewalks.

After an invocation from Vancouver Fire Department chaplain Peter Schrater and a blessing and memorial song from members of the Chinook Indian Nation, Smith recounted the timeline of events on the morning of the attack, stopping momentarily then as four F-15 aircraft from the Oregon Air National’s 142nd Guard Wing flew over the site at low altitude.

Vancouver Mayor Anne McEnerny-Ogle urged the crowd to remember the first responders and others who died as they worked to evacuate the World Trade Center and put out fires during the attacks, as well as the soldiers who fought and died during the war in Afghanistan.

“He’s a rare person who can give up so much so that others can live in safety, and we salute them,” she said.

Vancouver Fire Department Division Chief Tom O’Connor spoke about the 9/11 first responders who died over the next few years – and still die – from illnesses due to inhaling dust and smoke during attacks.

Vancouver Deputy Police Chief Troy Price urged the crowd to remember the spirit of national unity Americans felt the evening after the attacks, and Clark County Council Chairman Eileen Quiring , recounted the shocking impact of the attacks and echoed calls to remember first responders and troops who served in Afghanistan.

State Senator Annette Cleveland, who lived in Baltimore, Md., In 2001, recalled her experience hearing about the attacks on the radio while driving, then struggling to get in touch with members of his family, and his shock when the Federal Aviation Administration took the unprecedented step of immobilizing all planes in US airspace.

Lt. Gov. Denny Heck spoke about how historic national events are etched in the memories of those who experience them, and said he remembers the events of his life on September 11 with the same kind of clarity with which he could remember the Apollo 11 moon landing and the news of the assassination of President John F. Kennedy.

The anniversary of September 11 is a time to remember not only the attacks themselves, but also the ripple effect they have created over the past 20 years, he said, adding that the troops who lost their lives in Afghanistan were also indirectly victims of the attacks, and their families are, in a way, also survivors.

The commemoration ended with a series of ceremonies, including a release of doves aboard the historic WWII boat PT 658 into the Columbia River and a traditional ‘last alarm’ ceremony from the Vancouver Fire Department. , ringing a bell to signify the end of the last call of a deceased firefighter.

An urban archive was lost on September 11. This agency is trying to rebuild it.