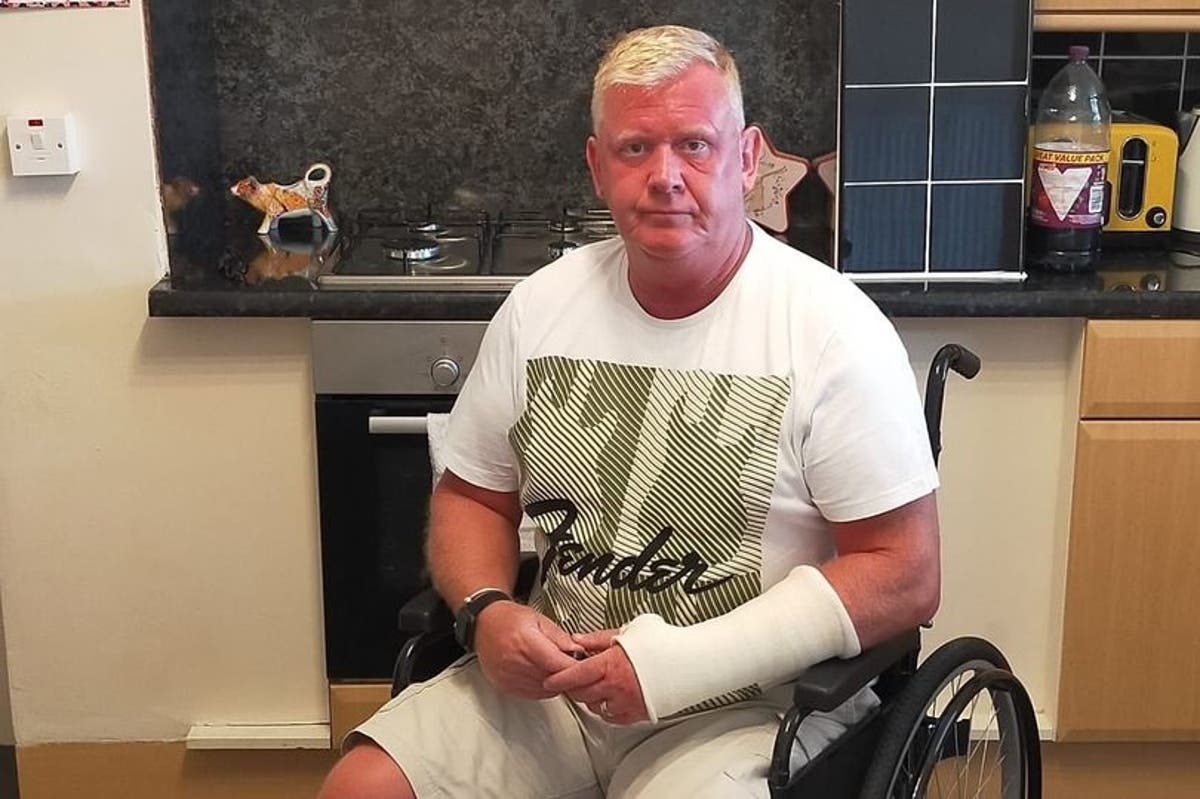 A wheelchair user with an amputated leg felt ‘as insignificant as anyone could feel’ when he was left waiting on a plane after landing at Manchester Airport last month.

Actor David Judd said an ’embarrassed’ Jet2 pilot had to come to his rescue to help him off the plane once it became apparent that no special support personnel were there. was available.

Mr Judd, from Wakefield, had arrived from Almeria, Spain, with his wife Amanda on June 18 when he became stranded on the plane as other passengers departed.

The 54-year-old – who had his lower leg amputated after an accident in 2019 – says he has already booked special assistance at Manchester Airport on several occasions without any problems.

However, on this occasion, approximately 30 minutes passed before Jet2 personnel on board the aircraft declared that no assistance was on the way.

“The pilot came out and said there were no more stewardesses. Then phoned saying there was still a guy here. The other people who had special assistance – they could walk,” Ms. .Judd Manchester Evening News.

“I had just gotten home so I couldn’t really put my leg up – so I really needed help.”

While the other passengers with special assistance were able to disembark with some difficulty, it was clear that airline staff would have to help Mr Judd off the plane.

“They recovered a wheelchair from under the plane, but there was no special assistance.

“He was so embarrassed; you could see it. You could really see it.

Mr Judd did not name the airline whose staff helped him.

To make matters worse, he was later injured on the shuttle from the airport to the terminal.

“We took the bus back to the parking lot and I got up trying to put my bags, and the driver put his foot down. I fell backward and hit my head and arm against the window.

The negative experience deterred Mr Judd from flying for the time being and left him “angry all the time”.

“You could say it made me feel as insignificant as anyone could feel,” he says.

“We’re supposed to go in September for a birthday, but I don’t really want to go. I really don’t want that feeling anymore.

Mr Judd says he also had a negative experience arriving at Manchester Airport to depart on the same Spanish holiday.

After checking in, he says, “I took my prosthetic leg off an hour before the flight and put on a compression sock to stop the swelling. When we have [to the airport]we had to wait which is very unusual as normally you are attended to immediately.

“We stayed around 35 to 40 minutes waiting for someone to come and help us. A member of staff showed up and took our cases from us and led them into a long queue.

“When we got to the security zone, he left. The security guy wanted me to go through the magnetic thing and said, “Can’t you just put your leg in?”.

“He could see that I was in a wheelchair. My wife had to carry all the bags and my leg which weighs about 8 lbs.

He complained at the airport immediately after the incident and informed Jet2 and the Civil Aviation Authority.

“Manchester Airport finally got in touch after I got the ball rolling with the media. I have to say it was just a generic apology and to be honest it was as cold as ice, blaming Covid at every opportunity,” Mr. Judd said. The Independent.

“[With] Jet2, I told them about our horrible experience and they never responded. It makes you never want to travel through an airport again.

A Manchester Airport spokesperson said MEN“We were disappointed to learn of this passenger’s experience when he passed through our airport.

“Like UK airports, Manchester uses a third party company to provide assistance, which is booked directly by the passenger with their airline.

“We take assistance needs very seriously and, prior to the pandemic, we were rated ‘good’ in the Civil Aviation Authority’s latest Airport Accessibility Report.

“We remain confident that most people in need of assistance traveling through our airport will have a positive experience, but we recognize that was not the case here. We will continue to work closely with all parties involved to ensure that passengers requiring assistance receive the best possible service and to understand how a repeat of this case will be avoided.”

“Learning from these times, we are actively working with our teams, customers and partners to implement efforts to minimize the impact on passengers as we navigate this phase of the pandemic recovery.

“Special assistance providers are part of a larger network of airport services that continues to face challenges, including a nationwide shortage of manpower and resources. Additionally, our teams are currently experiencing higher volumes of special assistance requests than our busiest pre-pandemic peak. »